@FUNTIME_FOXY101 here's the JavaScript tutorial you asked for
@snapenilk this seems great, will contribute to it tomorrow

Yep, I am already trying out the "Change the cursor" JS function. :D

this can go in the #how-to topic

Do some predefined objects.

We should make some guidelines so that this doesn't turn into edit wars on Wikipedia.
@bh 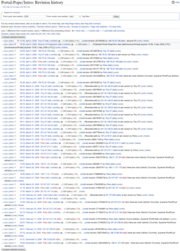 An edit war occurs when editors who disagree about the content of a page repeatedly override each other's contributions. Editors engaged in a dispute should reach consensus or pursue dispute resolution rather than edit warring. Edit warring is unconstructive and creates animosity between editors, making consensus harder to reach. Users who engage in edit wars risk being blocked or even banned. An editor who repeatedly restores their preferred version is edit warring, regardless of whether those...

This page discusses edit conflicts, and how to deal with them. To understand what an edit conflict is, consider the following situation: At the top of the edit-conflict page is an editing box containing Bob's version of the whole page, even if Alice is doing section editing. At the bottom of the edit-conflict page is a second editing box containing the text Alice was going to submit. This will be Alice's version of the page or section she was editing.

Does that work the same way as console.log("Hello, world!");?

I got edit conflict when you wher editing.

Yeah, good idea. We should.

So this is your first taste of JS :DDDDD

Hmmm, maybe we should let each other know when we are editing, and when the person who is editing is done, they should reply to it to let us know, and then someone else will edit?

Or is that my hyperness talking? XD

No one is editing, someone (one person) can edit now? (I had to edit to see if someone was editing, and then I pressed cancel when I was done checking.)

Hey, someone should make a JavaScript tutorial project with clickable JSFunction blocks.