I decided to go off of @fsul's cloud var blocks and create a chatroom. All the messages that are chatted are now permanent, meaning that they all stick, unless wiped by me or some cheater who got the cloud id chat code lol.

Please give me suggestions as to how to improve this project.

Archive of text messages in a .txt file

um @bromagosa u will not beat the sheer idiocy of my messages. never!

it does update live. im online rn talk to me

Doesn't work for me.

I wondering if it would be better to top post so that the last message is visible?

Or add a blank entry between real entries? 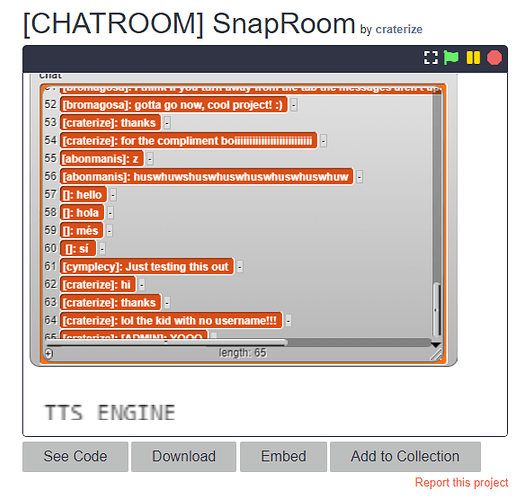 You could use the [ write [ ] ] block to type the text into the stage instead of using a list watcher too. It'd also be cool if you included the timestamp for each message

I checked it out and left a few messages. Like you said, the messages could be wiped by some cheater that got the cloud ID chat code. It actually isn't that hard to find it: See Inside the project, and boom, it's right there. I downloaded the cloud variable blocks, created my own test project, and set the cloud ID for the project to the cloud ID for yours. Before I actually messed around with it, I created a variable within the test project in case I accidentally did something stupid.
Turns out anyone can change that data regardless of who it is and what project it is on. You won't see it anymore, but I changed the data to something along the lines of "This is a test... Your data will return shortly.", then returned it to the original chat stuff. Then I fooled around with my own file.

So cloud works, and It's a thousand times easier to work with than Scratch, the problem is how to prevent others from seeing the cloud ID...

Thanks for the feedback!

You cannot make these impossible to hack. The only reason scratch cloud vars cannot be hacked from within scratch is because scratch does not have the JSfunction block. You can write a program that is an alternate scratch client, or you can get a Firefox extension and then go to a specific scratch page.
Snap! could implement these natively, and then generate the cloud id from the project name. However this could be broken by typing correct code into the developer console. The only true solution would be to make this section of Snap! not open source… which could work?

For me the cloud blocks are not working at all. Has the service you are using blocked my IP for some reason?

I figured it would be impossible to make these cloud variables unhackable. And as for your inability to use the cloud blocks, I'm not sure because I'm not the creator of them. Is it possible for you to at least leave a message in the chatroom, or even see the messages in there?

Huh. We have cloud variables? Who knew? Is this supposed to be a documented feature, or cognoscenti-only? :~)

I think this exploits a feature/loophole on Eckart's SQL server at Uni Goettingen. If you find a server that lets you write something you can basically share information with anyone. It's a neat hack but something to be observed critically.

remixed and added some stuff