Is there a key or a symbol in Snap! that can be used to represent the symbol for a flat note in music? (Our musical advisors feel that it is extremely important to be able to represent flat notes as well as sharp notes in lists of notes.)

Hi Glenn, I usually use a lowercase "b" to mean flat. But I'd perhaps like to challenge your musical advisor to liberate musical notation from the constraints of heptatonic scales and instead fully embrace MIDI numbers, because a digital representation is much more versatile with ... digital devices

@dardoro Using the "Unicode [9837] as Letter" as code block seems to generate a flat symbol.

@jens We totally agree about the potential of MIDI. We just got MIDI keyboard capture working with Snap! / TuneScope, and hope to post a video soon.

@jens We're viewing our exploration of extended music capabilities in Snap! as a precursor of a code-based Digital Audio Workstation. Here's a link to a video that provides an overview: 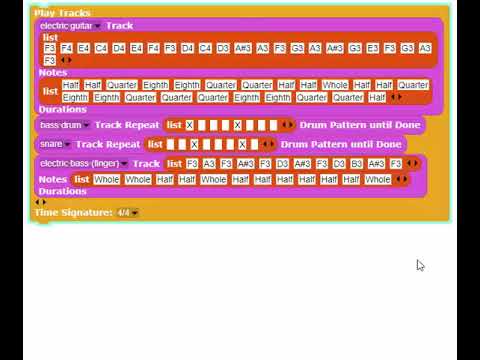 You can accepe lower case b as input to mean flat, and use a MAP (or maybe DEEP MAP, if appropriate) to convert "b" to "♭" on output.

Right, lowercase b is also my suggestion for indicating "flat", civilized musical countries avoid ambiguities by naming what is otherwise known as "B natural" by the letter "H", so if you stay within the most common "church keys" (C/F) you're not even going to have to use a "flat" notation ever.

Is there a preview available to play with?

@cymplecy This is definitely a work in progress. However, beginning this week, we are posting a strand each week in which members of the Snap! community can explore some of the topics mentioned at the end of the video. The strand for the coming week is posted here:

Complete the activities for Module 7 (Musical Notes and Scales): https://maketolearn.org/creating-art-animations-and-music/musical-notes-and-scales/ After completing the explorations listed in the text document for the module and watching the accompanying videos, Create a scale progression in TuneScope to create several measures of an original song in either a major scale or a minor scale. Then create a melody to accompany the scale progression using notes from the same scale. Use the…

We would welcome questions (if the activities in the tutorial accompanying the module are not clear). Once you have had an opportunity to explore, we would welcome feedback.

Are you interested/wanting feedback on possible bugs?

@cymplecy Yes ... we're definitely interested in identifying bugs and issues. The folks in the our CS department have a limited number of hours per week to address issues, but we're maintaining a list of problems even when we can't get to them right away. We're also happy to answer questions if the text documentation and or accompanying instructional videos are clear.

@cymplecy Thanks for sharing this issue; we’ll take a look to see what the problem is.

Blech, this is asking for a miscounting of one of the inputs. Why not 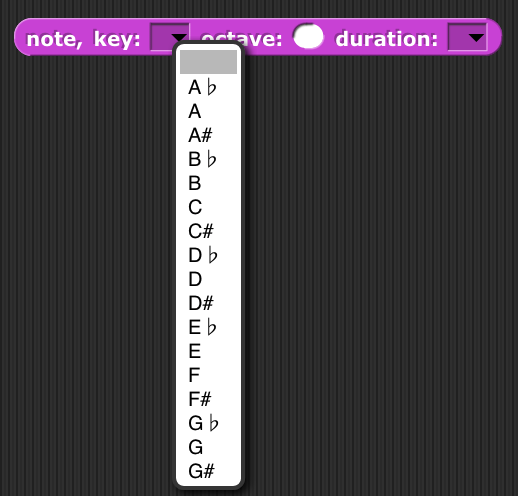 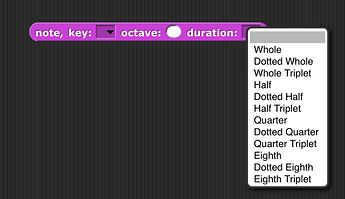 I actually have a few blocks I made a while ago that might help with this.
https://snap.berkeley.edu/snap/snap.html#present:Username=ego-lay_atman-bay&ProjectName=music%20blocks

I'm not sure if you need these though.

(and before you ask, yes, I did in fact edit the xml for a block)

@bh You’re correct that mismatched inputs is a potential issue. The current format (not surprisingly) is partly a legacy issue. We first introduced notes and durations as separate lists because we didn’t want to get into combining multiple lists into tables (and rotating rows and columns) at an early stage with novice coders. That early decision rippled through subsequent modules.

Another factor was that we only recently managed to synchronize latencies and timing across multiple tracks so that timing worked reasonably well. Since longer tunes that didn’t drift out of synch weren’t feasible, mismatched inputs weren’t as much of an issue.

A final problem was that we were trying to get a handle on music theory. We wanted activities to be equally inviting to musical novices and experienced musicians,and weren’t sure what formats would best facilitate this. We revised about sixty percent of the materials between the second and third times that we offered the course. We’re still not there but hope that we are converging on more accessible, usable activities.

So possibly in the next revision (during the Christmas break) we should revisit how notes and durations are organized (along with a number of other aspects).

... and my duration menu is laughably lacking. Probably that too should be broken into two inputs, duration {Whole|Half|Quarter|Eighth|Sixteenth|etc.} and duration modifier{(none)|dotted|double-dotted|triplet|quadruplet|trill|etc.}

I guess you're only partly teaching computer science, but I think of this sort of activity as an invitation to teach abstract data types, such as notes. :~)

Anyone who thinks that sans serif typefaces are readable should check out the word "trill" above and its punctuation.)

@bh @jbw3r We created a Duration block that has note duration (whole, half, etc.) and modifier (dotted, triplet, etc.) inputs:

Users can either enter values directly into the Play Note block or use the Duration block to generate the values:

At present we only have values for the Dotted and Triplet modifiers in the lookup table, but it is extensible so that anyone who wants can enter any extensions that they need. Here's a link to the documentation: 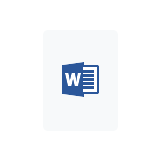 Here is a link to the updated duration block:

@cymplecy @jbw3r We'll double-check this to see if the tuning is off. Thanks for bringing this to our attention.