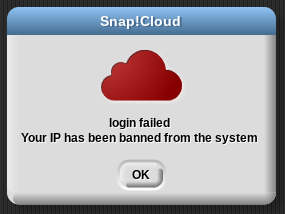 This happened to me as well. (@joecooldoo_banned) It fixes itself after a few hours.

School computers usually have common external IP (NAT). So, maybe, someone, from your school, was banned for serious threat.

It's very small chance that anyone using Snap! in @jbmc school, but
no excluded. Team of Snap! should revievs this case.

It's very small chance that anyone using Snap! in @jbmc school

not really, since snap is used in some schools.

This happened automatically. We'd like to look into this, can you let us know which IP you cannot use anymore, and which school this is? You can send us a quick email to contact-at-snap.berkeley.edu (replacing -at- with @)

Probably some other person from your school got IP banned so it bans you to.

i don't think i can email outside addresses since this is a school account.
(Also bump because the error is still here)

(it's not an error, you know. It means someone with that IP address repeatedly attempted to access forbidden directories)

forbidden directories? i mean, i made something in html with a snap editor embed. would that break anything?

I don't think good idea, not even encoding word

Yes, its encoded in sha.