Find a block in your project 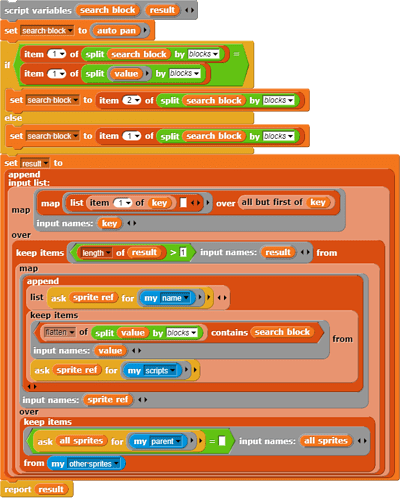 Thanks to @cornelios207 for a bit of the code

[edit 11Aug] Script updated to handle searching for variables as well as blocks. Its proving excellent at helping me find global variables that don't need to be global and can be made local to a sprite.
Also for finding that I don't use some that I've previously created

Note: Make sure you right-click and ringify the search block/variable you are looking for e.g. 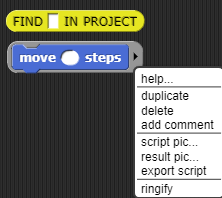 Find a block in your project Share your Projects

Updated to handle searching for plain text [findInProject] I thought this would be handy for finding broadcasts their corresponding when I receive blocks but the block can't find hats So, as a workaround, I'm going to add a comment block whenever I come across a receiver so that I can find then in future [image]

Nice. Super cool that I can just export the picture to see all the helper blocks and so on!

Huh, it's not working for me.

Can you test again please?

So I just tried it now and got this error message 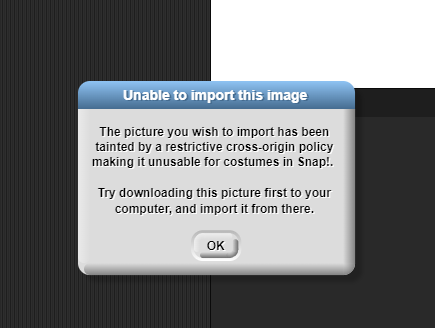 At least the error message tells you how to solve the problem!

Yes- it wins Error Message of The Day prize

You need to click the image first, and drag the full res not the scaled down thumbnail.

At least for chrome, you have to drag the image, not the url.

You know about the "Unused blocks" option in the File menu, right?

Oh, does it not find variables? We should fix that.

Got it. I'm glad you're enjoying metaprogramming! (There was a bunch of "who's going to use this?" in discussions at the conference. So now we have an answer: Hardly anyone will use it directly, but lots of people will use your library!)

PS I'm not convinced that FIND IN PROJECT has to be yellow and all caps; it doesn't do anything to the project.

PS I'm not convinced that FIND IN PROJECT has to be yellow and all caps; it doesn't do anything to the project

My thinking is that I need Snappers who accidently/inadvertently come across my IDE helper blocks to stop and think - why does this block look so strange????

This find block, in itself, isn't dangerous, but the sort variable blocks are and I'm thinking best to just put them all in the one category

But maybe this one could just go into a standard category???

We could compromise: Same category, but not all caps.

But stick with the black labels?

Sure, if it works with zebra coloring.