Broadcast vs Send msg to Help with Snap!

So previously I was telling a clone to 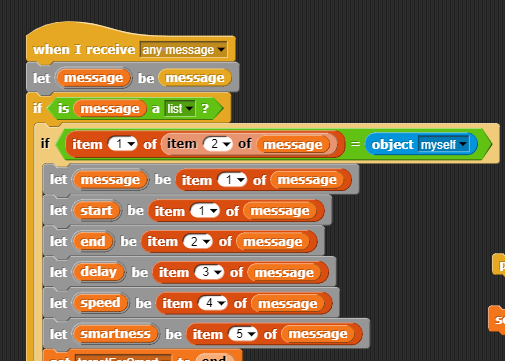 So the issues are

I'm only using this at the moment on one clone and only with one send so its safe as no other messages are being sent like this.

But if I expanded it to my other objects - missiles - bombers, markers and explosions (which can be many clones of each type of sprite) will it still be safe?

When I receive (any message) is always a little tricky if more than one kind of message is floating around. You should have the first thing in the message be a message name and start by testing for that. If it's the right kind of message, then you're the right sprite to receive it, so you don't have to check for whether you're in the list.

The secret hidden misfeature of BROADCAST interpreting a list message as including a list of recipients is one of the things Jens threw in without consulting me, or it never would have happened. If you give BROADCAST a list, then the message should be that list. Now that we have the equivalent non-secret non-hidden feature SEND, we should fix BROADCAST. Imho.

I had a bit of a panic for a second, as I use broadcast green flag clicked, but it turns out that the when I receive any message block ignores that specialist broadcast