Because of my very high myopia (short-sightedness), I was having trouble seeing very small colored tiles on map drawn using pen size 6 in the original project. 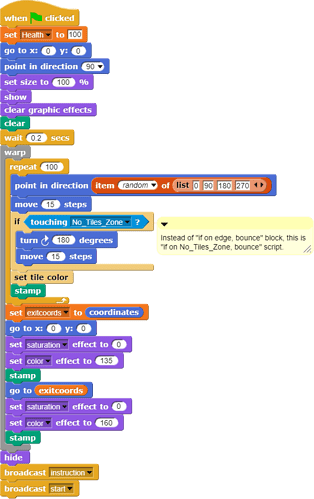 Is this meant to be an adaptation of the game or its own? Because personally it seems completely transformed..

Whenever I am inspired by a cool project, like yours is, to try and remix it, I honestly don't know will it turn just into an adaptation or into a completely transformed project. So, I don't know; what would you prefer?

I'm not saying this is a bad thing, it could be an alternative to the original game for people who aren't so tuned to solving a puzzle like this, but then again it changes the game so much that a solution could be walking in a straight line, so it loses that balance.

Here is an example: 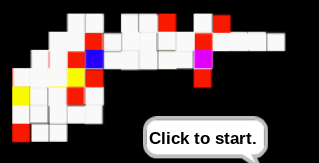 Though my game could also have a straight-line solution, it just wouldn't be practically probable.

Yeah, I am not smart enough to re-create the complexity of the maze that your pen approach can provide. I don't know how to change my code so that it would produce more complex mazes. Any ideas?

I feel like it would be beneficial to re-increase the size of the grid, maybe even do half-steps? Increase the distance that each iteration step takes, but stamp halfway in-between so that it creates gaps. 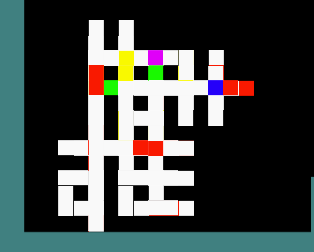 EDIT: Though I have to admit.. this brings errors at times, so maybe some extra detection to prevent the following from happening?

Great idea, you're smarter than me. Yes, that would do the trick. Do you mind if I change the code and give credit to you in a comment inside the code?

Yeah, extra detection has been added, but still from time to time disconnected islands appear, like this upside-down British and Irish island : ~) 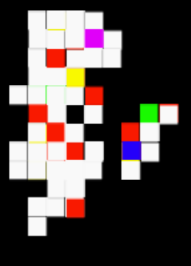 Oh boy, that is troublesome.

I didn't know what else to do - so decided to add another slider to enable jumping over multiple (minimum 1 and maximum 3) tiles lengths at once, when islands appear.

I have never been fan of games, maybe because I've not been good at games, so I prefer doing the interactive simulations, instead.

I am now wondering if the game could be somehow turned into a simulation. Maybe something similar to the self-driving car simulation made a year ago.

I think it would be cool to make some kind of pseudo-neural network that evolves over time to solve a maze.

Maybe using lists for moves that change randomly and scores are taken to see what to keep and what to change or rollback.

As for the interactive bit, you could change how score is given, to make it strive for different things, or you could affect something inherent about the simulation to see how it adapts.

I think it would be funny to see it try to win as fast as possible but then have its goal change to losing as soon as possible, and seeing how it reacts.

I wonder if it is possible to turn the orange vector (starting at the blue tile and ending at the violet tile) algorithmically into the series of blue vectors. 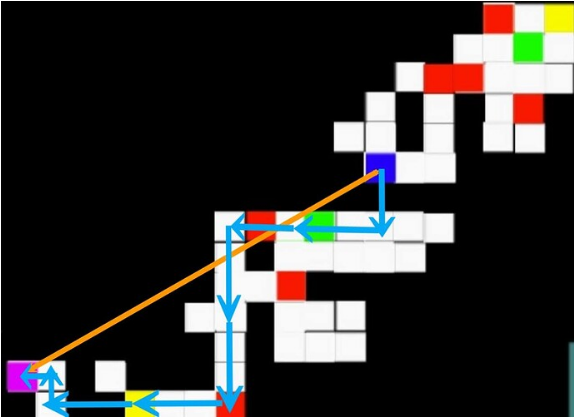 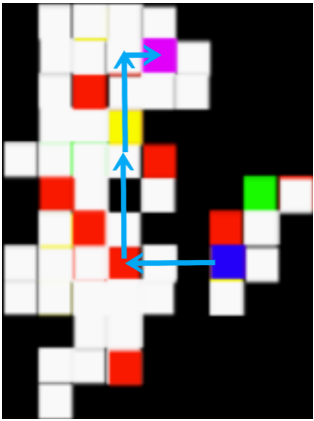 Maybe.. It'd be difficult though.

One way of thinking about it would be to try and make a 3-tiles jump in either X or Y direction towards the goal; if that would end up in black, then try 2-tiles jump; if it doesn't work, then try 1-tile move.

I thought of that, but it could take a while.