So, until Snap! introduces varidic custom reporters, this is my workaround

We have variadic custom reporters; it's grouped inputs we don't have.

But your solution is fine; I used to do something like that in Logo. The only improvement I'd suggest is that your "names" list should actually look like the same kind of name-value association list you use for "options," with the values serving as default values for inputs the user doesn't supply.

We have variadic custom reporters; it's grouped inputs we don't have.

The only improvement I'd suggest is that your "names" list should actually look like the same kind of name-value association list you use for "options," with the values serving as default values for inputs the user doesn't supply.

[edit - I've understood what you mean now. I've been umming and rrring as to whether to supply defaults with the options helper or whether to let the code within the main custom reporter decide what to do. At the moment, I'm on the side of getting the main reporter to do that but I might change my mind) ]

Is this to make a list the same length as (names) but filled with empty items?

Oh. That's exactly what it does. I thought you could leave out the (join >), but then I get this: 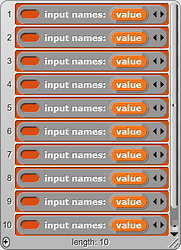 This is the one I made for this 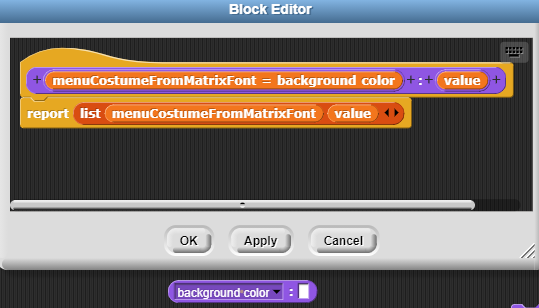 Do you mean the "a" variables in these two?:

Because those won't clash. 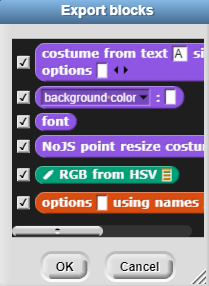 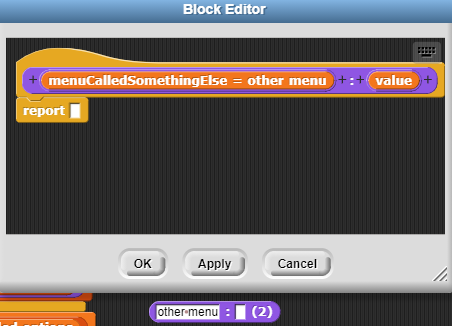 I'll have to see if adding in some invisible text will get around the issue...

It needs different title text, or a different number or placement of inputs: 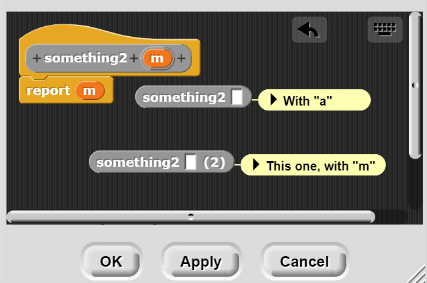 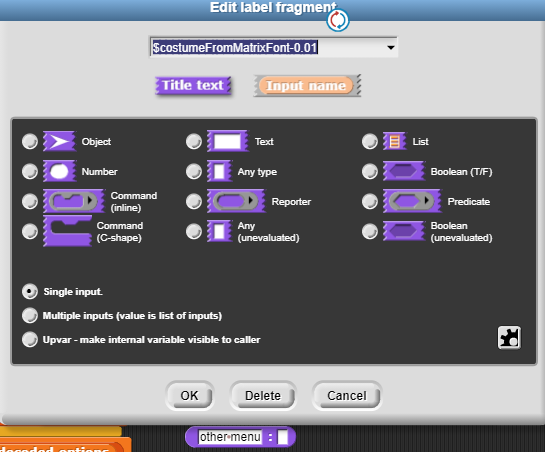 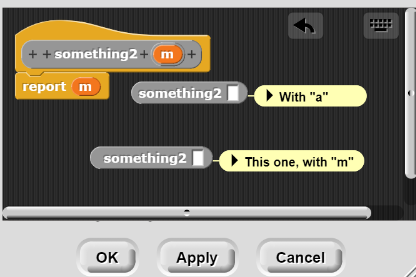 BTW why does the long input dialog appear when editing a "Title text"?

BTW: the concept of variant input assisted with reporter is borrowed from @wunder_wulfe project

dropdown is filled with

Getting cleverer and cleverer

I've been keeping away from using JS in menus since the change came and and I'm waiting for Snap! 7 to be released before revisiting the use of it.

I hate to say it, but this is a good use case for the Variables library, which Jens hates. You could dynamically create script variables for everything in the names list.

It'll be even better when I finally, if ever, get macros done, because what you really want is a block that takes the names list and the variadic input list as inputs, and creates script variables in its caller.

I'm waiting for Snap! 7 to be released before revisiting the use of it.

The Snap! 7 situation will be much like what it is now; you'll have to enable JS Functions to use JS in an input menu, except that libraries will be pre-approved.

Variable names in this scenario must be known upfront before running block, so they must be a part of some constant definition. Block variables are also much better in terms of performance (as script variables seem to be repeatedly recreated at runtime)
But yes, a kind of "transient" attribute for block variables would be very useful. Or block to clear.

I made a variant of the block

which read the declaration of a variable from the comment in the custom block header.

I wonder how you made it use the comment to generate them. Could you post a link?

Comment attached to header has a special meaning.
I already posted a link to test project.