FYI This is about variable options, not my costume reporter - it's just an example

And then I decided to add ability to colour the background

But then I've ended up with a massive reporter

Suggestions for custom block editor
What should I make my custom block look like?
loucheman September 10, 2021, 4:43pm #2

But you lose the "user friendy" use of your block

or add a color picker directly in the block

... so I've always admired the variable parameter option in GP (Browser GP) that, IIRC, was programmed up by Jens himself

Now one day, we might get this in Snap! as well but in the meantime, I've come up with this method of just having a multiple inputs parameter as the options parameter

This is what it looks like in the palette

and if no options needed then it can be shrunk

And we can have all these sort of variations

i unserstand now... you want somes of your parameters not required (with defaut value)

...
The main problem with this approach is that fact that a Snapper doesn't know what the optional parameters are as we can't provide text descriptions 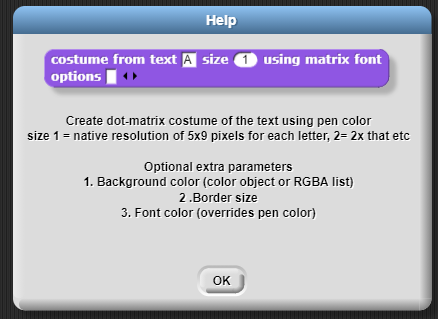 So this lets Snappers know what extra options they can use. 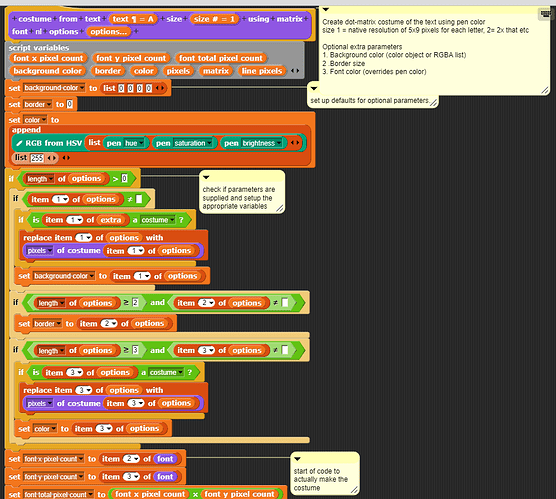 But since I originally made this block, I've gone onto do other ones and I decided that I really could do with a method of naming the optional parameters

This is one of the many reasons we need variadic input groups.

Lisp solves this problem with keyword inputs, so you'd say

including any number of the keywords in any order. The block-language equivalent of that would be to have a variadic pair of inputs in which the first one is a pulldown menu of keywords and the second is the corresponding value.

Variadic input groups have been on the list for a long time; we all agree we want this feature. We haven't totally firmed up a design for the UI in the block editor, and other things have been higher priority. But we should think about getting around to this soon.

I think what they're talking about, and what you might be as well, is the "with inputs" text of CALL, RUN, and LAUNCH W/INPUTS that doesn't appear if you don't have them in the block.

the "with inputs" text

That's another reason for variadic groups of inputs.

Was what you were talking about pretty much the [with inputs v] [] of the BYOB 3 RUN, LAUNCH, and CALL?

Wait, didn't you just ask that and didn't I just answer?

In BYOB 3 the "with inputs" is itself an input, but now it isn't.

Oh I see. I'd forgotten that!

Since then, though he's gone all in on the idea, as in the LENGTH block that turns into half a dozen other blocks via its pulldown. CALL WITH INPUTS vs. CALL WITH INPUT LIST is less drastic a change than LENGTH vs. JSON! So maybe we should revisit that decision When Things Slow Down™.

We now have several ways to distinguish among alternatives in a family of related functions: the original way, to have separate blocks, e.g,. for +, –, etc.; to have a hidden RELABEL option, e.g., for MOD, MAX, MIN, etc.; and to have an explicit pulldown, e.g., for LENGTH, FLATTEN, COLUMNS, etc. I don't think we have any coherent policy about when to use which. The reasons are partly historical (i.e., how does Scratch do it?), partly aesthetic (is a pulldown ugly here?), and partly a sense of just how related or unrelated the functions are. In retrospect we probably should have chosen RELABEL for the LENGTH block, but that would have been less discoverable.

Oh I see. I'd forgotten that!

I guess I made you remember something.

I no longer remember exactly why we changed that interface in 4.0.

Maybe because no-one would really want a [inputs v]/[input list v] dropdown on all blocks with variadic inputs.

Oh yeah, that sounds right. At first only primitives had variadic inputs, but pretty quickly we added them for custom blocks too, and that required a notation. The red halo around the arrowheads is my fault, btw.

The red halo around the arrowheads is my fault, btw.

I wonder if Jens had any idea what to use for that.

I think maybe using the arrowheads was his idea -- my contribution was turning the halo red to discourage people from using it accidentally.

...
so I came up with this reporter

And you get exactly the same result as before but you can use the names of the parameters and only pass in the ones you need.

And the result of using this inside of the costume reporter

It looks nicer if I use a color picker of course

So, until Snap! introduces varidic custom reporters, this is my workaround 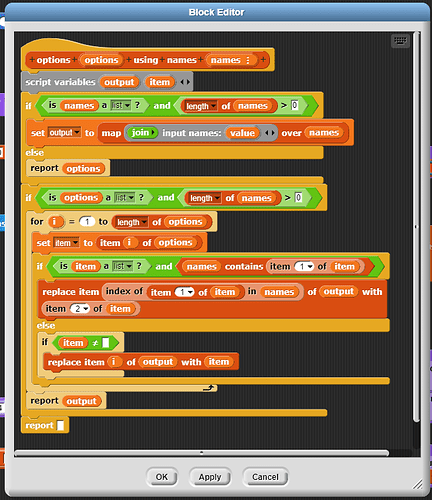