Below it's shown a mock-up of the additional band dedicated to remixes
& *re-*remixes, featured by the Snap! site moderators. 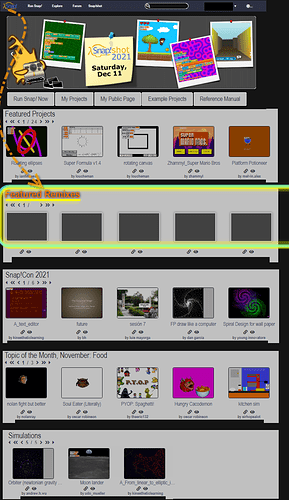 P. S.
One can choose from and try to remix any of the already featured projects or even from the total of 5 mio projects celebrated recently by Jens in his project below:

I would agree with this. Putting a remix straight on the featured category is a bit wrong. Having a whole category for this makes it easier.

Oh NO not more competition! Remember what happened to Scratch? There was so much competition that unpopular people started becoming jealous and mass reporting projects to take them down.

I think he means that featured section would be divided up into original projects and projects that are remixes...

I think he means that featured section would be divided up into original projects and projects that are remixes...

Yes, I have no idea why slate_technologies thinks this would encourage competition, when it would in fact encourage remixing which is itself a form of cooperation; a non-simultaneous cooperation (which is far from competition).

Yes, this is a good idea. Plus it's more for me to explore and look at and learn from.

I'm currently rewriting the site, and when I'm done it'll hopefully just work like it does now, but it'll be much easier to modify and extend.

I'm not taking requests ATM, because I'm too busy as it is rewriting the whole thing, but please ping me when I'm done with the rewrite