ok, now i'm REALLY sorry, but an ask and tell block that can communicate with other scenes ( and a help for the scene block, and a scene #/name would be good.) would be good.

ask and tell block that can communicate with other scenes

I have a feeling they're gonna add something like "scene variables" that are global across all scenes. Also a way to run scenes when they switch to them. Remember, they're not finished, so don't suggest ideas because they're probably working on them. (right now, the only way to have variables communicate between scenes is through javascript variables)

Wouldnt it be cool if this worked?

You could just use if statements and multiple custom blocks. Also

yeah i know, but sadly, that doesnt work in codification

i dont think it worked

I don't know what you're trying to do, could you please explain? Also

basically what im trying to do is

after a few seconds, and then you click it again:

Can't you just make a block called test and have report (current [second v]) be the definition? (or a variable called test like what dardoro showed)

what if i want to make it multiple like: 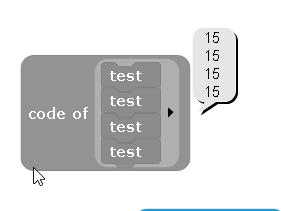 but i want it to be workable in codification

Damn, you must be translating to an extremely esoteric programming language.

i made a simple but very buggy demo of a very simple platformer i made with scenes.
mediafire download link: Alonzos Adventures - a platformer involving Snap! 7.0 scenes (1)

I see that you're having the same script attached to the scene hat and the green flag hat. This makes me wonder whether it's a good idea to fire the scene hat whenever the project is loaded.