Welcome to the next level of Snap!

Snap! is now a community website where you can share and publish projects so others can find and remix them, and where you can ask questions and discuss the beauty and joy of computing. We invite you to check out the new site. Did you know that you can embed Snap! projects in other web pages?

We've also enhanced the programming language, making it easier to discover and to use powerful blocks for analyzing data and transforming media. 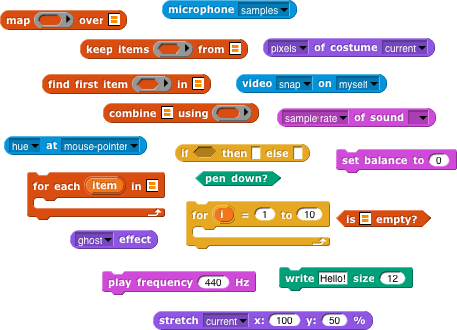 Over the next days and weeks we'll be sharing more informations about new concepts, activities and features to explore here. For now here's a first overview of what's new in Snap! 5:

Hi Jens and the Team,
Thanks a lot for this monumental release for SNAP! and all the features.
SNAP is definitely the premier block development environment.
Looking forward to the family upgrades in S4A etc to round out the entire suite.

Congratulations Jens and all your collaborators!

Thanks, Richard, great to see you here!

Hello! My name is Bernhard and I am a complete newby. Sorry for probably asking dumb questions.
I am very grateful for SNAP - it is a wonderful program that helps non-programmers like me to set up things with reasonable effort - thanks!

I invested many hours in programming a mindopeners game and finished on the 23rd of june. Because I hoped to be independent of internet connection problems I saved the last versions in the browser.
Checking today I no longer find the option to open from the browser.
I interpret the sentence "deprecated storing projects in the browser's localStorage" that this is on purpose.
I think I understand that saving it as an xml file is the new and probably better option.
Is there a way to recover what I have saved in the browser?
thanks bernhard

Hi Bernhard. You can recover projects that you've previously stored in "in the browser" even though that option has been deprecated by pressing the shift-key and holding it down while clicking on the "open" menu item. Then you'll get the additional option "browser" again where your projects still will be loadable. Please let us know if that helps.

Hi Jens, thanks a ton, everything there ... thank you also for the quick response!
I saved it on the cloud and on the computer now ...

Btw, is there a possibility to show somebody my program to check it for improvements? I am happy to pay for it of course
thanks you Bernhard

Btw, is there a possibility to show somebody my program to check it for improvements?

There's a "help with Snap!" category here in the forum. Publish your project and post the link there. No guarantees, but we're a friendly bunch. It'll help if you can ask specific questions: "Is there a better way for me to... in my FOO block?" rather than just "how could this be better?"

pressing the shift-key and holding it down while clicking on the "open" menu item.

News to me. I thought we were going to show the browser button to anyone who in fact has projects stored in browser store. This way isn't very discoverable.

Looking forward to the family upgrades in S4A etc to round out the entire suite.

That's not up to us, of course. Each extension developer has to deal with it, and some extensions are more currently maintained than others.

On our list of features for some day is a way to automate differential extensions, so when a new Snap! appears, the extension just works, unless there's a git conflict, in which case the relevant people are automatically notified. But of course it would then take a big effort for extension writers to fit their extensions into that new system.

No guarantees, but we're a friendly bunch.

I mean, it isn't anyone's job to review users' projects, but so far people who've asked for help have gotten it, afaik. But if/when the forum really takes off and the Help category gets a hundred-post backup, it'll mostly have to be users helping users, because our (mostly unpaid) staff won't be able to keep up.

because our (mostly unpaid) staff won't be able to keep up.

I have a lot of experience in online community moderation and will be thrilled to help!

the volume wasn't mean to injure you, but I'm fully expecting that finding out how that nasty sound is made must delight you...

isn't it a pulse wave or something related to that?