This weekend I was listening to an interview with Stephen Sondheim on public radio. He commented that a rhyming dictionary was one of the key tools that he used for creating lyrics for his musicals.

Has anyone created a tool that accepts a word as input and returns a list of rhyming words?

There are several online rhyming dictionaries like Data Muse with an API that returns a list of rhyming words:

Possibly this could be used to create a tool in Snap! 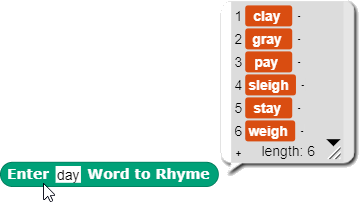 Of course, there may also be ways to do this entirely in Snap!

Those six words are all one syllable. Doesn't that dictionary think that "Mandalay," for example, rhymes with "day"?

Would could get the community to build a library of words for you. (Of course make it so only people you trust can do it)

@bh I haven't full explored the possibilities of Data Muse, but there are a number of switches that can be used to shape output - the number of syllables and other parameters, etc.

@joecooldoo Crowdsourcing a library of rhyming words sounds like a great project.

I can create a database for this.

OK, done. Snap! 6.9.2 Build Your Own Blocks
If anybody wants to add to the database, just post something like this:

MAKE SURE TO MAKE IT IN A CODE BOX LIKE ABOVE!!

The following script generates rhyming words that are sent to the console:

This is the output that results:

How can a JavaScript variable (such as "response" in the example above) be imported as a variable in Snap!

What's wrong with the

You can SPLIT BY JSON:

For me at least, "fretful" doesn't rhyme with "let phil".

@dardoro That's perfect ... just what we needed. Thanks!

You can SPLIT BY JSON:

Not that useful for a demo

The dictionary might not have that word in it. 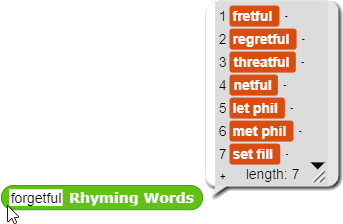 However, the way in which I'm achieving this is a kind of brute force approach. (Give someone a hammer and everything looks like a nail.)

Is there a more elegant way to accomplish this or is this a reasonable approach?

Is there a more elegant way to accomplish this or is this a reasonable approach?

P.S. who said "orange" didn't rhyme with anything?: 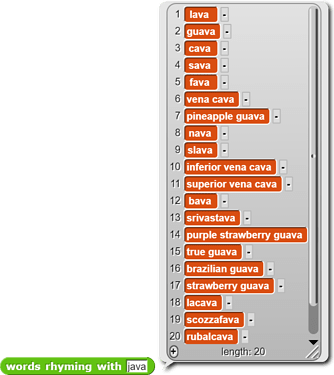 WWW's use of KEEP makes the code easier to understand as well as smaller, but as a general rule, whenever you have a MAP directly inside another MAP, you can combine them by making a composition of the functions each one calls. So: 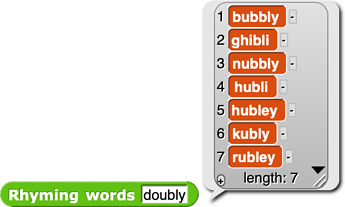 Untitled script pic724×436 65.3 KB
This is exactly your procedure, but condensed to a single MAP call.
next page →