This API includes a variety of blocks!

Try it out by clicking here!

If you want to improve or report bugs on this project, you can post a comment on this post! I'll be sure to kindly check it out and add it inside the project. (and yes, i'll credit you.)

Could that feature be added?

Oops! Everytime it resizes, it returns into the centre of the stage for better pen rendering. I'll fix that soon!

Maybe I'll use the name to save the positions and size because I'm too lazy to do variable listing...

Instead, use ids for each one, so there are no weird collisions.

As a little improvement, you could draw a border for the windows like this: 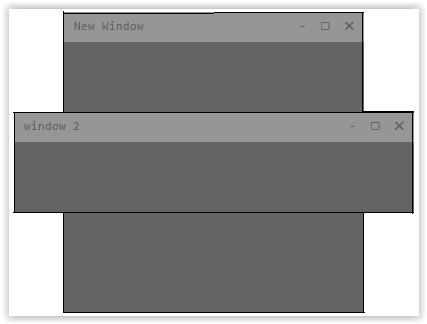 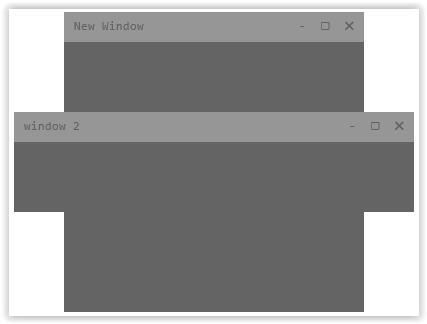 Hmm... I forgot to add those again?! (This happened 2 times before)

As a little improvement, you could draw a border for the windows like this:

I was about to make it soon as I was fixing the resize, but thanks for giving the border concept!

I just woke up though, so maybe I'll release these patches soon enough!

Interesting idea! I had one big issue with it, and a couple of minor details about the programming.

The big issue is that the description of GO TO WINDOW led me to expect that the sprite would be attached to the window. You can do that with SET [MY ANCHOR] TO. Thereafter if you move the window, the sprite will move with it.

One small issue is that instead of

Qdow API script pic (1)742×86 16.1 KB
Strictly speaking, we don't make any promises about the order of the clones in the list reported by MY CLONES, so it's better to use the new clone directly in the TELL. (This is why having the reporter version is so much better than just the command!)

And one more, which is that you can save some time by taking advantage of hyperblock features. For example instead of

I haven't read all of the code but there are probably more such cases.

And one more: you can save some time by taking advantage of hyperblock features. For example instead of

I haven't read all of the code, but there are probably more such cases.

This part makes the title bar and the window body. Your modified version turns every pixel to that pixel, and it's not how i intended it to do. The code i made is not that complicated but it's optimized enough to make a window.

This one i can qualify as an optimization.

it's not how i intended it to do.

Ah, sorry. I still bet you could use RESHAPE but whatever.

How did you do that though? Did you edit it on an image editor? It's too complicated for me to make it...

You need to modify the drawing process of the window...

It's too complicated for me to make it...

Kinda... I had this optimization idea using reshape and append:

I made a much faster way of rendering the window by extending the lists and connecting them using append. hope this might help with other beginners' projects

I don't know what you mean by that. Can you please explain?

Generate a unique ID for each window, and use that to identify different windows instead of using the window's name. This makes it so I can make more than one window with the same name.

That makes sense. Thank you so much for explaining!

Very cool! however, SnipOS 7 will not be adding the Qdow API. (yet.)

Sorry if this is a turn-off for some people, but I've already worked really hard on it since early January and I would have to redesign everything.

That's what significant updates are for. Try adding it anyway! I'd say all these previous updates weren't very "major," It was more like a "new app" and stuff that didn't need a new major version.

This update, however, is major. I am going to attempt to add something like it, OS7 will support more apps with windows, but for me to add resizing is something I really don't want to do, seeing as this version is releasing in about 8-9 days.

OS8 (Codename: Clementine) will have many new features I can't say.

I'm already beta-testing window resizing with ColdFusion Architecture, but that won't be for this major version.

If you want window resizing, and that's all you want, go to Frames OS.

If you want games, apps, community features, and more, go to SnipOS 6.