I created a table of musical notes and corresponding frequencies: 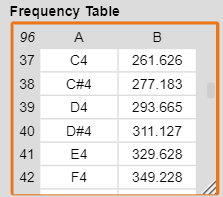 I would like to create a block that reports the musical note that is nearest a specified frequency. One approach would to create a loop and check each frequency in the table until the closest one is identified. Since there are only eight octaves of notes in the table (i.e., 96 items), that might not be an unreasonable approach. However, is there a more elegant strategy?

you could try incorporating some sort of binary search

or you could estimate the index of the frequency in the table. since musical scales are exponential, you’ll probably have to use logarithms to do this.

yeah it’d be the inverse of the function here right?

This is a list of the fundamental frequencies in hertz (cycles per second) of the keys of a modern 88-key standard or 108-key extended piano in twelve-tone equal temperament, with the 49th key, the fifth A (called A4), tuned to 440 Hz (referred to as A440). Since every octave is made of twelve steps and since a jump of one octave doubles the frequency (for example, the fifth A is 440 Hz and the sixth A is 880 Hz), each successive pitch is derived by multiplying (ascending) or dividing (des This ...

Oh they have the inverse function there already.

Yep - that looks like enough info to get started

If you load the audio comp library, there's a note from hz block, which might be what you're looking for. I created a block that can translate a note number to a note name, so here it is.

I included a few more blocks in the project that might be useful.

not really important but whether you say, for example, C# or Db is dependent upon the scale. So the notes in the B major scale would be (getting this from memory i may be incorrect) B C# D# E F# G# A#, and not like B Db D# E F# G# A#, because in the latter D appears twice. In your situation, however, there isn’t really a defined scale so you can just do whatever you want I guess. Which is why I said this isn’t really important.

This is very nice. Thanks for sharing this.

I always use the built-in note reporter:

and one of my favorite little quick projects is to connect it with the play frequency command inside a forever loop to make an auto-tune "Cher" effect for whistling into my headset microphone.

But you need the Math behind that, because you're not getting the frequency from the microphone right?
I'm using this formula for it:

[edit] oh right! I forgot all about the reporter in the audio comp library, thanks, @ego-lay_atman-bay !

I'm using this formula for it:

This is great stuff ... the microphone block is terrific.

There's probably a better way of doing that, but I can't think of one.

a better way of doing that