Hello,
I would like to create numbers of predicate functions with sprites as entries objects. Like that : 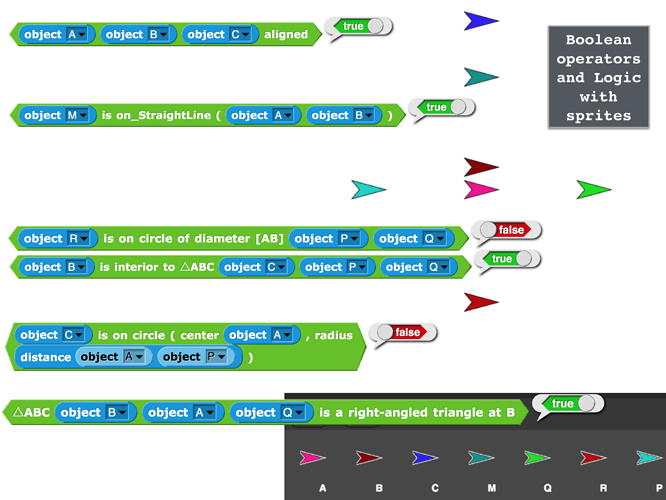 .
Do you know a way to drag and drop the sprite itself as the entry of a block ?

Any idea ?
Could it be a feature request ?

And, that's a great idea for a feature. We don't have it yet, though.

@nathalierun What's the difference between aligned and on_StraightLine? My guess is that for the latter, M must be between A and B; is that correct?

What about wrapping every sprite into reporter with colorful names 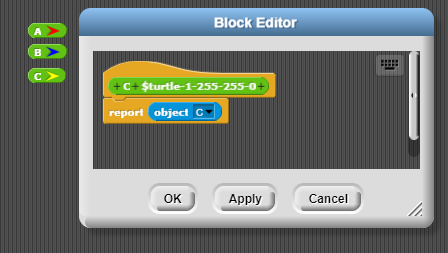 wrapping every sprite into reporter

Once we have program-generated blocks. Definitely on the list, if we ever get past putting out fires.

There is proof of concept project:"Make a block"

XML is in default Snap serialization format. Initial pattern can be get by "Export blocks" menu. There is a "silent" version of "Make ..." without visual confirmation.

You probably cool. It is a little more computation than something native but it would work.

We did similar hacks with autograding.

Allows for you to use some of the features that are not available to use from the UI. Most of these features work just fine. https://i.gyazo.com/f26f67b390ef68d96434fe00835021fa.mp4 Here is an example block to get the type for an input. All of the values come from my blockSpec block https://i.gyazo.com/cac03829bc09a00cbb67e31961e9b3bf.mp4 There will be blocks for compiling the new XML data so you can copy and paste it into a file which you can import. This is just a tool to make it easier t…

Thank you @dardoro for this little trick !