have a variable to know the amount of health, and increase/decrease it when you grab pizza or go down in health otherwise. to see if they're hidden, make another variable called "hidden?" and set it to false or true. then get the heart sprites to hide or show based on whether it's true or not.
TL;DR variables.

one sprite that creates several clones.

Edit: I figured out this wasn't towards me but PLEASE stop replying to the last post when you mean to reply to the topic or someone else. It's very annoying.

but it'd be too difficult

it probably wouldnt be as hard as you're imagining, make a list and store the clones in it maybe

i thought up of a easier solution

it doesn't use vars, just

A game has a game loop. You check for stuff in a game loop with if statements.

I just meant that the when block will make the stop block more annoying to use and run when it's not supposed to. If you use a stop this script block in a loop, it will stop checking and can be restarted later, but when blocks are always running, so if you put some sort of if statement inside it will keep checking or running that script anyway and lag the project.

Pretty neat I have no ideas for this currently but I will think of them but for sure, Jump Scares are a need.

Same with event listeners though, I just wanted to explain from JS perspective

probably near when im almost finished with the game

Here is the scrolling function

You don't have to go through the pain of making this function. 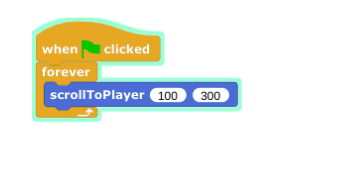 Where 100 is, you can replace with chosen x, and where 300 is, chosen y. Experiment with the numbers until you find one that is comfortable 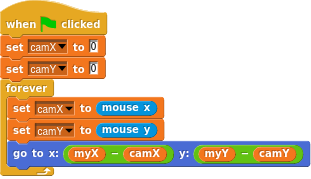 Add the goto block to every sprite, the ones that set camX and camY aren't needed

?but i already made a scroll function?

what is that for?