There is a block in scratch That I can't seem to find in Snap, I don't know if it needs to be imported but I was wondering if there was a block that would allow you to check for an item in a list and then post its list number. Ex:
My list: [A] [B] [C]
And the block would allow you to look for say, B in the list and then Post 2 because it's the second item in the list.

If there isn't such block is there some work around to make the same thing work?

Sure, you can write the block yourself!

There are lots of ways to implement this. If you're accustomed to Scratch this way is probably easiest to understand: 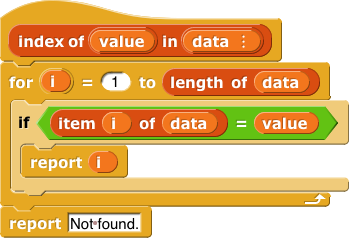 Thanks, that works perfectly!

I was looking for some way to do this and I gave up! I'm gonna add this to my workarounds for blocks topic

I was looking for some way to do this and I gave up!

I ask because I think it's probably the most frequently raised problem, either as a suggestion for a new primitive or as a request for help, and I've never really understood why.

I just gave up because there was a pretty simple workaround. I was going to use it to find a clone number