So i want to make a block that reports the name of a variable or list. I found an old project and copied the code but it didnt work. any fixes?

This thread may help you out

Could you be more specific on what exactly your after?

what am i supposed to look at

Need to make sure the variable is unevaluated

Sorry for the noise

So i want to make a block that reports the name of a variable or list.

I'm curious why you need this. Could you say what problem this will solve for you?

By "inserted into" do you mean used as an input to it? Isn't the menu>variables option in the input type dialog the right way to do that?

No, that reports the items in said variable.

No, that reports the items in said variable.

It lets you use a particular variable (the variable itself, not its name or value) as an input to a custom block. Whether you use it to look up the value or change it is up to you.

Edit: No, I lied, it gives you the name, I guess. But you can use that with CALL WITH INPUTS or RUN WITH INPUTS to get or set the value.

so uh... i used a dropdown for the var list, and it actually writes the variables name. now the problem is that it doesn't show the variables value

it writes the variable name twice

an easy way is this

(it has to be a variable in a ring) 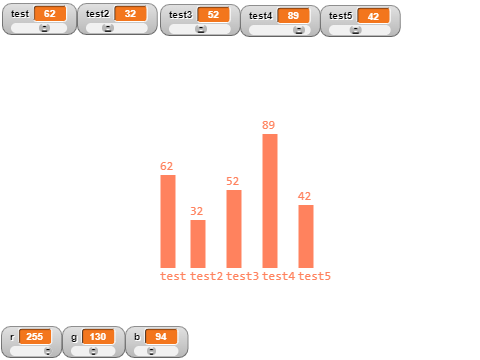 Wait- do lists have names? Is this a thing? (I’m being serious, I legitimately don’t know!)

Can you give me an example? I just don't know what you mean by "the same thing with a list"

do lists have names?

They do in Scratch, but not in Snap!. Instead, variables have names, and you can put a list in a variable with SET like anything else.