Hi, as the list of files gets larger, it’d be useful to be able to create folders, so saved files are better organized.

I think you must have several projects in the cloud... 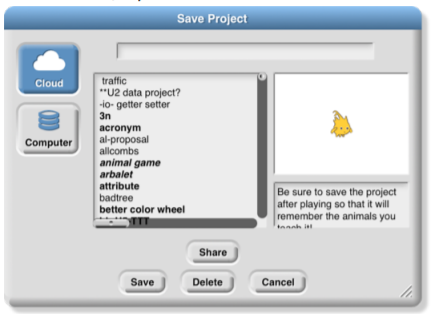 Those are some of @bh's projects.

WOW! Look how small the scroll button is!

It's practically a circle! And the horizontal one is small, as well.

well, bh has more than me, lol 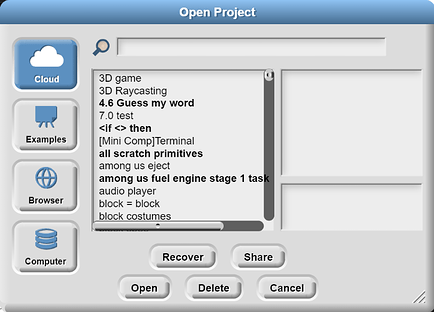 And you have a lot! I don't have as many: 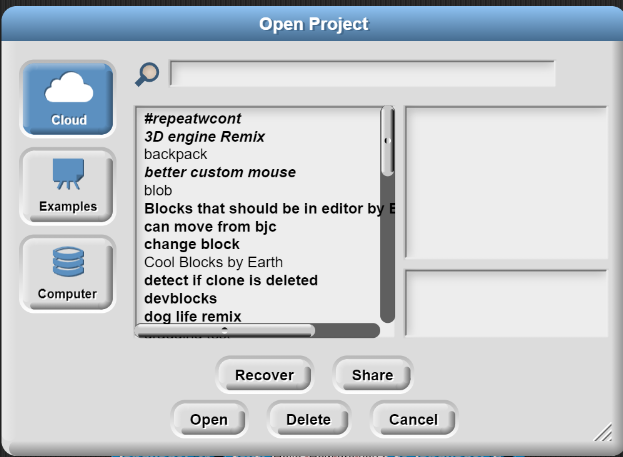 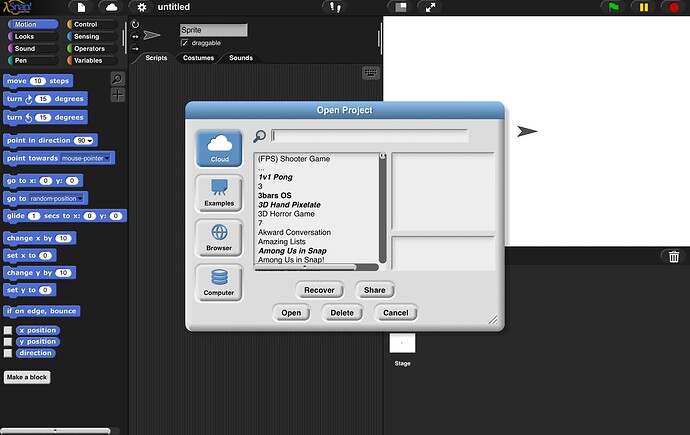 Last I checked on the Snap! API I had something like 142 projects. (A few weeks ago)

Oh, dear. I hope you don't have to scroll all the way to the bottom of that.

I use search bar.

I use search bar.

Yeah, me too. But a hierarchical file system would really help.

At the last meeting we had, I think the conclusion was that we weren't going to have a real hierarchical file system in the cloud back end, but maybe we can build a UI in Snap! that will simulate one (based on tags, I think). As usual, no promises about when this might happen.

One of the underlying disagreements is that some of us expect users to use the web site to open their projects, which I guess is the only way to do it in Scratch now. For people who think that, it's a disincentive to putting effort into the editor UI for features that'll also have to be in the web site UI.

But I don't think I'll ever open my own projects via the web site, which I find slow and klunky for the purpose, not least because it loads the project into a web site page before I can click "see code," which is all I ever do there, even for other people's projects. I'm much more interested in how a project works than in what it looks like to the user.

The web site is good, imho, for browsing other people's projects, especially because of the topic collections such as Science and Art.

But I don't think I'll ever open my own projects via the web site, which I find slow and klunky for the purpose, not least because it loads the project into a web site page before I can click "see code," which is all I ever do there, even for other people's projects. I'm much more interested in how a project works than in what it looks like to the user.

Me too. My main portals to the Snap! editor are typing in the url snap.barkeley.edu/snap/snap.html, and the forum.

You can just say snap.berkeley.edu/run.

Am I the only one who uses the site to open a project in the editor?

[offtopic]Are you the same person as who replied to me on a Scratch forum topic I made? Pic:

I use the online editor.

@bh When you mentioned Collections, something lit up:
Maybe it'd be useful to be able to turn one's Collections into simulated folders in Snap*!* 's UI?

Thinking about files and Collections, some options are:

Yeah, you're recapitulating part of the discussion we had.

The big reason current collections can't serve as folders is that you can't put a collection in a collection. The people who want to use them as folders offer to change that.

The second biggest reason is that putting something in a collection doesn't remove it from your visible file list. The whole reason people want folders is to not see all their projects at once.

But when using a collection for its original intended purpose, you don't want to remove the project from its owner's visible file list. So we're going to end up with two different things, collections-being-used-as-collections and collections-being-used-as-subfolders, that will behave differently. I don't really understand why some of my colleagues want to bend themselves into pretzels to avoid calling the latter "folders," but as long as I get hierarchical folders I don't care what they call it.

The big remaining argument is the one I mentioned before: to make this work in Snap! we have to add all the usual folder apparatus into its open and save-as dialogs: include folders in the current folder in the project list, with a folder icon in front of their names, open a subfolder when you double-click it in the list, add a "new folder" button to the save-as dialog, etc. And some of us think that instead I should have to use the website to access those features.