@montyjones We have created blocks that extend the music capabilities of Snap! We're using the blocks to explore music. Here's a short video illustrating the way that we're using them in an art & music class:

If you would like to explore the code snippets illustrated in the video, you can access them here:

This version is in a Snap! extension called TuneScope, but in the near future we're hoping to make the blocks available in a music library that can be accessed from Snap! 7.

If anyone else is using code to explore music, we would be interested in how you are approaching it.

this is so cool, it may justify a major Snap! release

I have a suggestion. Since you let the user type a note duration, it would be great if the user could type in a number for the note duration (like the primitive play note blocks). It allows for even more flexibility. It's actually a simple change, just do this 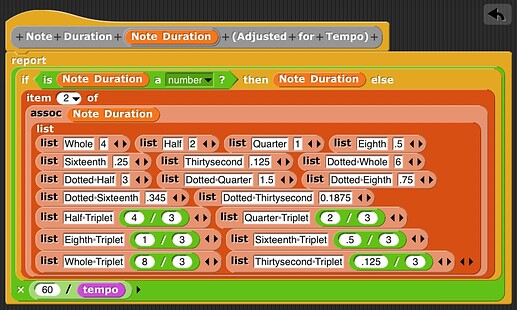 Could you make a simple tutorial for it, so I can figure out how to make something of my own? Might mod the blocks and make new ones once I get a good feel for them.

We have found that users would like us to put together a sequencer (similar to commercial sequencers) as a front end to expedite construction of melodies. We are in the process of considering potential ways in which a user interface might be constructed to facilitate generation of note sequences.

When the blocks are moved into a Snap! music library, we will definitely develop an introductory tutorial.

In the meantime, an entire self-paced course is available here:

This may be more than you need, but an introduction to all of the music blocks is provided.