I am using a touch sensor that reports the status of twelve sensors as a decimal number. This number must be converted to binary to determine the state of the sensors. For example, if the sensor chip reports the number 5, this would resolve to the binary output "1 0 1", indicating that sensors 1 and 3 were being touched.

I wrote a procedure to convert the decimal number provided by the touch sensor chip to binary:

Can any of those who are mathematically inclined take a look to see if this is the most straightforward way to obtain this output? (Thanks) 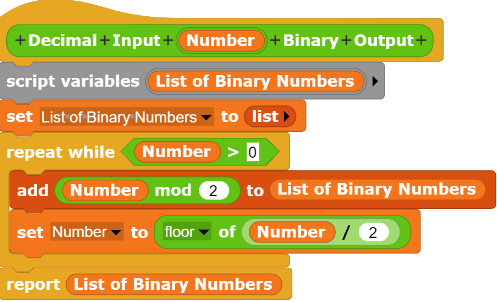 your algorithm, using MOD to pull off digits, is mathematically elegant.

I am glad that you think the algorithm is elegant, because it is your algorithm. (I just borrowed it.) [smile]

I see you made that picture of your script by screen capture. Do you not know about the "script pic" feature?

Everyone in the lab but me uses "script pic", and loves it. I used screen capture back in the day, and never adapted to modern conveniences.

Your actual code is needlessly ugly because you use imperative rather than functional programming.

This is the part in which I am most interested. Even though the method that I used works (i.e., reports the status of the touch sensors correctly), the recursive approach that you illustrated is more elegant.

We're developing this in the process of developing a library to enable Snap! to communicate with microcontroller via MicroBlocks. Since the point of a library for MicroBlocks is to relieve users of the fine details required to communicate with the microcontroller, I'm assuming that most folks won't have a reason to look under the hood. But if anyone does, it would be nice for it to provide a good model for implementation.

Thanks so much for these thoughtful recommendations.

Everyone in the lab but me uses "script pic", and loves it. I used screen capture back in the day, and never adapted to modern conveniences.

Did you know, since v8, when someone uses the script pic function to bring a script to the forum, we can import that script directly into a snap project without having to re-write all the code.

But as as loucheman says, the new ability for script pics to include the code makes it worth the effort to use it instead

What browser are you using? In chrome, when I save a file (such as by making a script pic) the file's name shows up on a bar at the bottom of the browser window, from which it can be dragged into the forum window. Easy peasy!

The same thing works in Firefox if you install the Download Statusbar extension.

The same thing works in Firefox if you install the Download Statusbar extension.

In firefox, the file is in upper right (in a down arrow icon), you don't need an extension...

We should probably start a new thread with a different title for this topic, but I tried script pic, and it seemed to work as advertised.

However, that leads to two questions:

Well - if you go to the dark side

and enable choosing what folder/filename downloads go into, then this problem evaporates

Other problems rear their head but it gets around this one.

In Chrome it's in

As for your second question, it sounds as if your pdf-creation program is removing the metadata on purpose (perhaps as a privacy option?). Or, if you tell it to change the size or something, that will generate a new png without the metadata. In short, it's beyond our control.

Yes, for that I would need to post in a PDF Forum rather than the Snap! forum. However, the range of expertise of the Snap! community goes so far beyond Snap! across many different topics that I thought that I would check here first.

We compose our documents in Word before converting to PDFs, so I thought I would start by exploring whether a script pic could be imported into Word without loss of metadata. I thought that part of the answer might lie in enabling the option to turn off image compression.

However, that appears not to be the entire answer. As a next step, I'll need to ask some of the CS folks to look into it, and determine what's required to import an image into Word without loss of metadata.