So here is my idea:

If there were cloud variables on snap, I think you could make something like a cloud LIST. You could have different values to represent different content people to put in the list. Different lists can be different categories of content. Lets say maybe you could put together a little tune with the song maker. The notes used could be converted into a little code and be put in a list. There can be a little input at the bottom of the screen and have them enter the item of the list they want to see. Then lets say someone made a tune, i can make a function where it can convert the code and play it as a short song(I might put a limit to how long an item of the list can be.)

why isn't there cloud variables on snap?

They don't have the storage space to add them. Also, it's much harder to make it not be abused than you think. If you want cloud variables, many users have created their own, which you can setup to use in your projects.

I made a project with cloud variables using Firebase! https://snap.berkeley.edu/snap/snap.html#present:Username=spaceelephant&ProjectName=cloud%20test. Please do not use these in your own project as is. There is a section at the end for how to do it properly, and I can help if you have some trouble. These can be read from any number of times without using any bandwidth. There is a little bit of bandwidth when a variable is changed, but you can read any number of times other than that. The http…

More improved cloud vars! https://snap.berkeley.edu/snap/snap.html#present:Username=18001767679&ProjectName=my%20cloud%20var%20blocks (I will make it anticheat if you guys tell me how to get request url (http-origin?) in Flask) Update: Always on now! Doesn't need JS

or cloud space will be stuffed.

How to make a cloud variable server? Advanced Help with Snap!

Does anyone know how to make a cloud variable server for snap? (with replit)

(this one does have a tutorial in th replies)

My version hasn't been updated to the extensions format, and firebase is probably not a good tool for cloud variables anyways. Repl, linode, or a self hosted server (and static IP) are all possible alternatives, although websockets will require javascript extensions.

Ok i can see that. If it is an extension that would be great.

Putting lists in cloud variables is also super easy, because there's a built in function to get the json of a list (list as text), and vice versa.

Ok I am really close to making something like a chat room. It is not showing any errors except when I only put in one letter, but that isn't very important.

The big problem is that when a sentence or word is put into Unicode, the interpreter see's it as a list. So I have is cycle through character by character as you see. 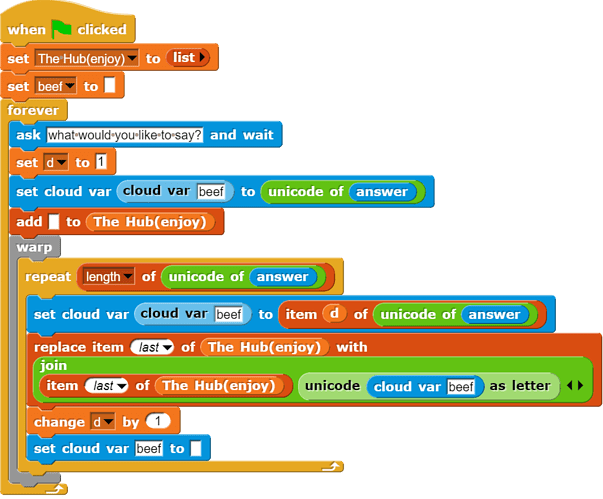 Javascriptless Cloud Blocks script pic958×794 128 KB
When I run it, it only shows it as a box as if it is an unsupported character. What is going wrong?

(I am using a fanmade cloud variable btw)

just so you know, chat projects are actually banned, all because the snap team can't moderate all the chat room projects.

Gang. In the past couple of days I've seen a conversation arranging a Zoom meeting and a signature containing a switch friend code. And I haven't been following all these chat apps you've been building; I'm terrified to think what I'll find there. I'm not Chicken Little; I don't think you're all going to be abducted by strangers pretending to be other kids. I know that the vast majority of child abuse is committed by relatives of the child or by authority figures such as teachers, priests, o…

(this also applies to chat projects)

It is fine if you leave the project unshared, but it might become a problem if you share it.

Is that true? I thought it was kinda a soft ban; like if you have only whitelisted phrases or a super awesome blacklist, it’s like somewhat okay. Not 100% above the law, but really, what is?

pretty sure a whitelist would be ok, but maybe not just a blacklist.

Or safe listed words.
Also, each message would have to be check both ends of the conversation.