Because the snap team didn't want to have cloud variables as it takes up server space, I thought you could have cloud broadcasts that send information over the cloud.

hmm thats an interesting idea
but i dont know how do make that.

Why did you link that?

We're actually working on that. Hold on

It's a mod of Snap! that should support what you want.

We're actually working on that. Hold on

will that support the lists and other object like a clone ?

@bromagosa Is it going to be cloud variables or cloud broadcasts?

you could do the equivalent of cloud broadcasts with cloud variables.
for example: 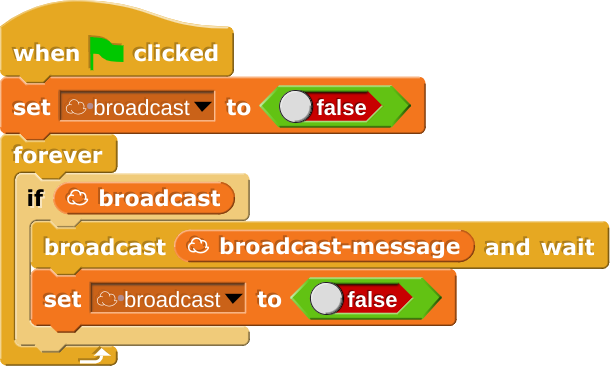 (the script that recieves the project-local broadcast would use the "broadcast-data" variable for data.)
and to send messages:

image754×168 35.4 KB
and then if every copy of the project is running these loops, they will all recieve the message and run whatever script.
edit: whoops i forgot script pic doesnt automatically copy to clipboard
sir_kitten April 28, 2021, 5:50pm #14

I don't think they would want cloud variables as it takes server space...

i was just saying in case they add cloud variables and not cloud broadcasts, there's a solution for that.

It's the other way around. We're probably going to only add cloud broadcasts. And they unfortunately won't be able to carry much beyond numbers and strings, at least in the beginning!