Category Jam is a "Game" Jam where (a) user/users have 3 days to make a category of blocks.
The category is judged by originality, utility, and effort. The event starts tomorrow (March 29th). Good luck! (Comment to request to join).
Post the links here on April 1st

I think this should be called "Library Jam" because it's basically just, create a library of blocks. 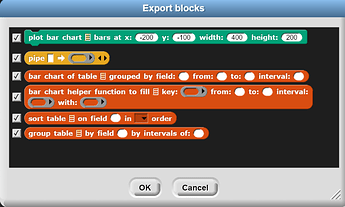 Some blocks are used for lists (the blocks in the lists category) the pipe block is to run scripts (control category) and the plot bar chart is to draw a bar chart on screen using pen (which is why it is in the pen category).

As you can see, a category is to categorize blocks by what their primary function is. A library is a set of blocks that can be spread across many different categories.

and what i'm looking for is a category, a group of blocks that are based off of one main thing

but if you want to you can make a library, with no point deduction

Every category is a library, but not every library is a category.

Okay, anyone want to team up? I have an idea, which is to make a category where you can use the blocks to measure sine waves and voltages and such. It will probably be useful if you are into Electrical Engineering and such and want MORE out of Snap!

You can use an Arduino UNO R3 to use this library. There will be a seperate forum post for setting up the Arduino to measure voltages.

I am going to submit something but it wont be judged

Do you want to team up? I'm trying to make some sort of library in Snap4Arduino which can turn an Arduino into a Multimeter or Oscilliscope. But the problem is that I don't know much about conversion and such so I need help.

i wouldnt be much help with that

You are doing the ML contest. :~| Abandon on the first day?

I already made a small library a while ago, but havent worked on it since.

edit: you can find them at https://mr-owlsss.wixsite.com/snap-it

Im workin on both lol