The fifth module in the spring Art & Music course provides an opportunity to explore creation of a paint program in Snap! Those who are interested can access the fifth module through this link:

The sixth module invites you to design a simulation of a Calder mobile in Snap!

Alexander Calder is a sculptor known for his innovative mobiles – kinetic sculptures so well balanced that the slightest air currents cause them to move and sway. This type of mobile art can be emulated on a computer using Snap! 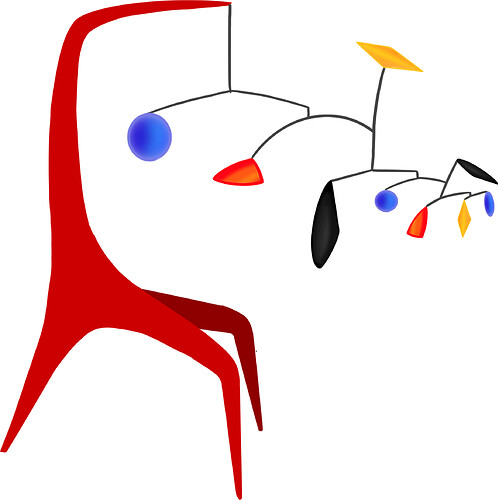 One of the best-known Calder mobiles is in the atrium of the East Wing of the National Gallery of Art in Washington, D.C.

Here is my Calder inspired art. I used multiple parts together for the desert scenery.

this is so adorable!

Hey guys here's my calder inspired art, and I added a dreamy surreal touch to it (not sure if it's still considered calder lol). I first created eight individual pieces of clip arts ( golden frame, back and white block, sky, moon, clouds, and meadow), made 8 costumes with each of them, and coded the specific motion for each.

Here is my Calder inspired art! I was inspired by home as well

Hey everyone, here is my Calder inspired art. I made a simple piece that only used two sprites, one that was Lightning McQueen and the other which I used as a background.

Hey everyone, this is my Calder inspired art. I made a piece that involves people walking back and forth on a mountain trail. The foreground has bushes and flowers while the background is that of a forest. The flowers sway in the wind and there is a nest that also sways in the wind.

Our strategy for the first half of the Art & Music course was to invite participants to emulate the work of six artists using Snap! That strategy seemed to work well for the first five modules.

We envisioned that participants would emulate the work of the artist Alexander Calder in the sixth module through creation of an animated mobile. (Calder was known for his kinetic sculptures powered by motors or air currents, which he called "Mobiles".)

This module is stimulating development of some innovative creations, but so far none of them have anything to do with the type of art that Calder might have created. For example, one project animates a car, Lightening McQueen, from the Pixar movie "Cars." Since Calder died before the Pixar animation studio was founded, it is fairly certain that there would not have been an opportunity for Calder to collaborate with Pixar artists.

However, since animation is the aspect of the module that seems to have captured the imagination of project developers, perhaps in the future the focus of the module should be shifted to the "Art of Disney Animation" (or something along those lines). Any thoughts or feedback would be welcome.

Hey everybody, this is my Calder inspired art. It is a bit janky, but I think it is a good start. The goal of this piece was to create an animation of someone playing guitar. The piece consists of a man named Cliff on a stage. His arms are moving back in forth to emulate the strumming of a guitar. He also moves right and left slightly every second. Hope you enjoy it!

I designed a beach background that is just supposed to replicate if you were to go out and watch the ocean. A lot of the pieces move similarly but at different speeds or timings in order to replicate the real world.

Hi everyone, for my "Calder Inspired" art I made an animation of Sonic the Hedgehog. I wanted to play with the illusion of motion by changing the background and animating sprites. I hope you all enjoy it!

For my Calder inspired piece, I created an animation of a motor boat travelling across waves. Creating the right motion for the boat was tricky, and I have it set such that when the boat touches any of the waves, it will rotate as if it is bouncing off the wave.

Here is something more natural:

For my Calder inspired piece, I decided to create a simple animation primarily using the "next costume" script. I designed my own characters using illustrator and created multiple costumes to reflect motion. I then imported the different images as sprite costumes into snap! and created my script. I would like to continue to develop this and perhaps add more characters and create more fluid movement.

Another piece:) (sound on )

Hello, this is my Calder inspired work where I created a pixel animation using many moving parts and testing out x and y axis boundaries as well.

Now, i'm ready to jump and got somes rings !