The preceding modules in the Art & Music course have suggested ways to use Snap! to create art in the style of six different arts. This week we invite you to create art in a style that is uniquely your own. You can draw up onto the techniques that you have explored in previous weeks or use different approaches. This is a week to synthesize different methods for generating art using a computer.

(I don't know why the sound won't play when you open the link. I don't know if it's just my computer. Hopefully you can hear the background music when you play my animations)
Hey guys, here's my art project. I made two pieces of animation art, and both were inspired by space art and digital installations. When I was back in Singapore, I used to go to these super fun light shows and art exhibitions all the time. I remember this one space-themed show where you go into a dark room and the walls light up and change patterns as you walk around. So for my first piece, I was inspired by the use of light and shadow, and wanted to create something that symbolized the integration of light, darkness, life, and space.

The animated light beam that runs within each light bubble represents the light of life that bounces within our mind, our body, and our soul, which are also symbolized by the three conjunct light bubbles. They are situated against a dark backdrop, which represents the void and depth of the cosmos. No matter how fast the light beam moves within the bubble, the bubble itself just rocks gently in the dark space, which was intended to convey the idea that human existence is enshrined in an all-encompassing cosmic force and that when we contemplate our life and human history from the scale of the universe we perhaps feel humbled by the vast expanse of the unknown.

In terms of the process of creation, for the rainbow-colored light beam, I created 48 individual costumes and animated them to form a series of motions. I then duplicated the same beam twice and placed them each in a light bubble. I then made separate code blocks to make the light bubbles perform the swing motion.

I wanted to create a mesmerizing ambiance through my animation, and visualize the interaction between our existence, our life, and space. Hopefully the music I added facilitated such an ambiance

And the second piece I created was not exactly part of the first project. I just did it for fun

It was also space themed, but definitely less abstract and less surreal.

Here is my animation art project. I created this short animation from a video I took of my two dogs running around in the snow. I took snip its of the video at roughly every second of the portion of the video I wanted and exported them into Snap. I also added sounds of barking to make the animation come to life. Lastly, I added a pause button to simulate a real video where you can press the space key to pause the animation.

I was inspired to make this animation by how videos used to be made, frame by frame. I liked how you can see the individual pictures and the specific movements it portrayed instead of a smooth movement video.

Here is my project! I really liked the idea of a game and some animation, so I decided to make a program where you can make a smoothie! I thought it was cute and fun. When I was younger I was always fascinated with food that became digital..This reminded me of that.

Here's a cleaner version of my ocean game that we discussed in class. The goal is to reach the finish line without touching any of the sea creatures. You have three lives, so if you contact a creature three times, the game is over. The hardest part of the animation was getting the creatures to move across the screen correctly and at random time intervals.

Hello! My animation art project is a simple space game. The goal is to live as long as you can, dodging meteors and UFOs. To balance the game, I utilized the timer in Snap to create levels where the meteors begin to speed up as time goes on. The scoring in this game is given by how long the player lives multiplied by how many coins they can collect.

Hey everyone, my art project was an animation that built off of my Calder Mobile style artwork. I added more cars and different backgrounds, and enlarged the cars by a little bit as they got closer. I also made sure that the cars moved at different speeds so they didn't clump together.

For my art project, I chose to do an animation which I've named Storybook Wolves. In my piece, I wanted to create a whimisical setting where wolves run through the woods. This was inspired by the fact that wolves often play mischeif-makers and villains in folk stories. I used multiple sprites to create my forest effect and used skills like stamping to create the background. In the animation, leaves are falling onto the forest floor, apples are swaying in the wind, and foxes are running through the forest. When creating my piece, I focused on creating a depth and played with resizing my different elements to make it feel more realistic. I created 8 costumes for the leaves; 13 costumes for the wolves, and editted different images to make sure that they seemlessly fit into the animation. Additionally, I found a musical composition that I believed added to the mysticism of my piece.

For my art project, I combined the techniques of Pollock and Seurat to create an abstract piece based off of a photo I took. It uses the color matching technique from Seurat to create an image similar to the original, but it also incorporates the random line drawing of Pollock so the image comes out distorted. Depending on the random lines generated, some aspects of the original are lost and some are exaggerated. I ended up with a torn figure staring off into the sunset and at her friend who has lost his form, as a victim of the lines. 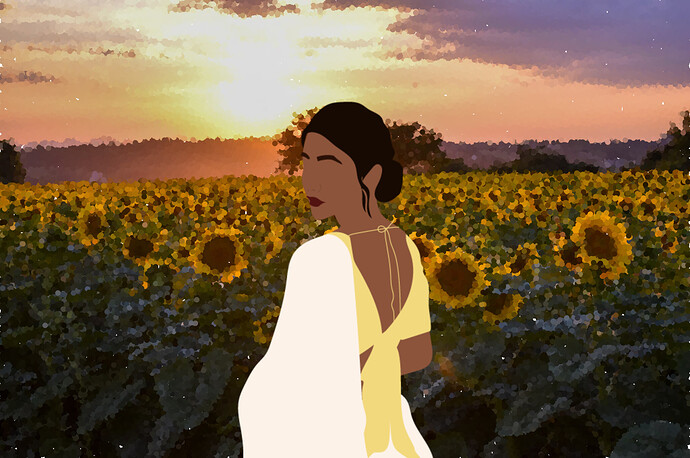 Stage-102048×1360 553 KB
For my project, I decided to use the impressionist painting technique we learned combined with a simple costume animation. I used a photograph of a sunflower field for the impressionist background and created an illustration of a women wearing a sari. I would like to explore these techniques further in the coming weeks because it brings together art forms that I'm most interested in.
jjh5bc March 18, 2021, 11:31pm #13

Hi everyone! For my project I made a game based on The Legend of Zelda. In the game you face an endless hoard of enemies using the arrow keys to move, A to attack, and D to defend. The game is split into waves that each have an increasingly larger goal for the number of enemies to defeat in each wave. Once you complete a wave, the enemies come out faster, but you gain some health. I expanded on the animation techniques learned in class to make the player character an all enemies fully animated. I very much enjoyed making this project and I hope you all enjoy playing it as well! If you end up playing the game, please let me know your thoughts on it and post your high score!