A true-filled list (or, am I more random than you?)

(Note that this is a question about randomness and the pick-random. I have an opinion on the answer, but I would like all of yours!)

In the block palette, there is a custom block that will report a "

The inside of the block is as follows:

If, a thousand, times, you

more random than a normal

? Or is the reverse true?

My opinion: I don't think so. If the special-random block relies on the normal pick-random, then they most likely are the same level of randomness (not that I could measure it, haha) but what do y'all think?

Oh! No, I just wanted to know if the special-random block was more or less random than the pick-random. Not for any specific reason, just toying around. Thanks for the website, though.

Could you show how you derived those numbers? Because it seems to me that 1 and 10 are guaranteed to be among the options, so the probability of getting 1 or 10 should be larger than for the middle numbers, not smaller.

@pajamaclaws21 I'm not from the South and I say "y'all." I think a lot of non-Southerners do, by now. 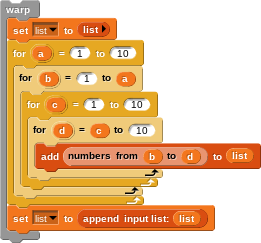 which gets their numbers from lava lamps.

what? how? lava lamps?