Why is my script adding to both lists?

Hi!!!!! I was trying to make a project today that could download stuff like images and audio from the internet, and save it to a list for later use in the project (in an attempt to make graphic/audio heavy projects and a minimal file size), and came across a bug either in my code or in Snap! where the script would add to both the Downloaded Costume and Sound lists when told to add to the Downloaded Costume list. Is there any way to fix this???

Link To Unlisted Project: Snap! Build Your Own Blocks 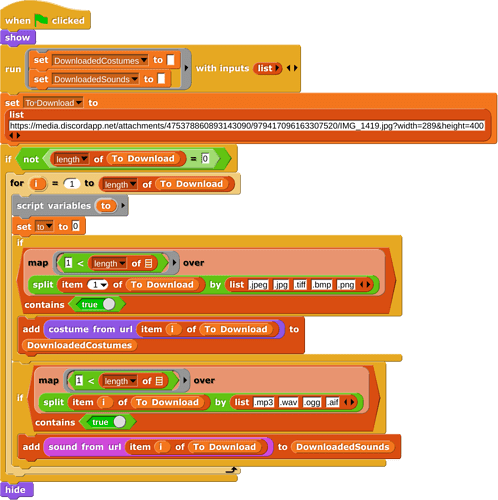 Also, don't mind the image I am using as an example in the project, just something my friend sent me whilst making this lol

You are setting both variables to the same (empty) list in the first instruction.

I copied a list to another variable, and then when I change the copy, it changes the original too! FAQ

Short answer: You didn't copy the list to the variable, you gave the same list another name. [The pictures below are a lie. See below the divider -------- for the full story.] Here's what it looks like: [untitled%20script%20pic] [Stage] The list is made of pairs, each of which points to one list item (left half) and to another pair (right half). The right half of the last pair is a special empty-list object. [untitled%20script%20pic%20(2)] The variable FOO points to the list, and the S…

to fix it, just use this method for resetting the variables instead