Which libraries are the (custom) blocks in the opened project from?

Have you ever opened and read someone else's project and found that it contained some custom blocks? Of course you did.

Have you asked any of the questions:

A feature request for Jens :~) 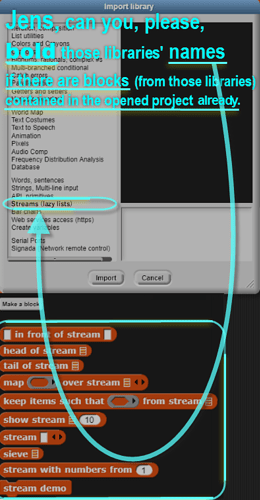 It's a little more complicated than I think you think.

What if a user loads a library and then modifies some of its blocks? Does that count as the blocks coming from the library?

What if I want to use a block that's in two libraries, e.g., LET, and so I load one of the libraries and delete everything except LET. Do both libraries get bolded, or do you want us to remember the actual history of library loading?

What if you loaded an old (e.g., v6) library? Does it still count as having loaded the library?

Maybe store metadata about the libraries in the project file?

More memory is being used that can be taken from media or coding.

Well, it wouldn't need that much memory, only a few lines, maybe like

Do both libraries get bolded?

Yes; bold all the libraries containing the block(s).

i don't know if it's crystal clear ?

I understand what you mean, but I guess it is probably not as easy to implement as my feature request. Can I ask you to create a new topic for your suggestion to make it clear that they're separate feature requests?

i understand but my request is very related to yours ... (we need your functionality to implement mine)