Where did all the blocks go?

Too lazy to actually type every single command, so here is the thing. 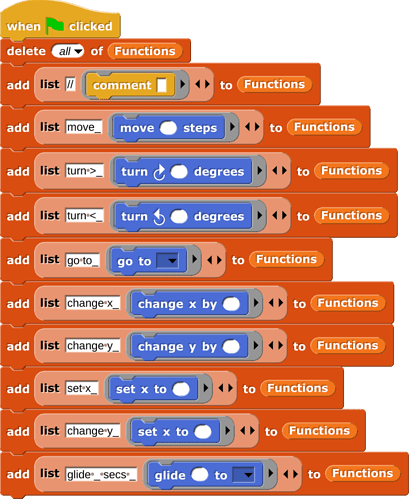 Edit:I changed the tag. I will now never use the words "lack thereof" in a sentence ever again.

Edit the Sequel:Will add variables tomorrow. Do not use for now.

nice, but does lack-thereof mean?

I think it means that there are no blocks

You can put "or lack thereof" after something to imply that you're not sure it's going to exist at all.
E.g. "His confidence, or lack thereof, was the reason he failed the test."

Not quite, lack thereof means due to the lack of an aforementioned thing. So, with your example, he failed the test because he downright didn’t have any confidence.

I don't think so? In helicoptur's example, the person has either too much or not enough confidence, causing him to fail the test.

Well, at least what I meant was that there are no blocks, at least you can't see any if you're not editing it. I think I would've been better off not adding any tags in the first place.

I'm planning on adding reporters into this thing.

Update:Variables exist now. I think I should change the title of the project at one point.

I will now start to add c shaped blocks

Update:Forever now exists in the form of:

I really need ideas for first class functions so if anyone knows please help.

meaning that I will(later)probably add these blocks:

P.S: If you were using the previous version, please don't switch here (YET). It doesn't have list capability, because I need a way of making lists without making it impossible to make empty or one item lists.