There is no command in the variable, and its not in any custom block 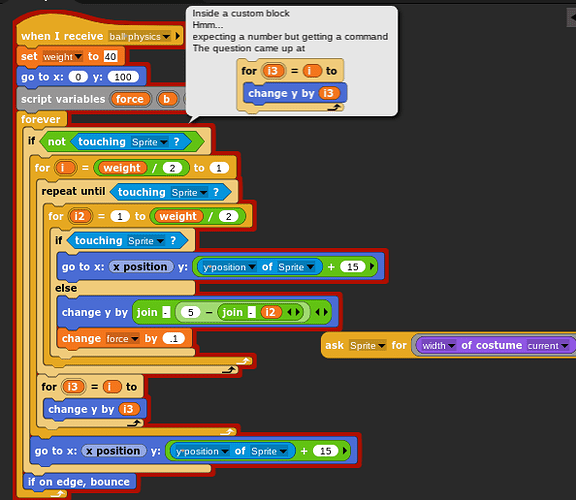 Although not having any code bugs on my side,you might want to fix the bouncing 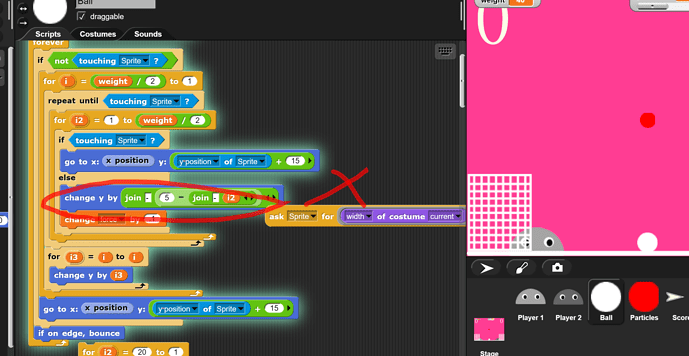 Looks like that you're using a weird for block. Me works fine.

look at the other FOR blocks.
it's from one number to another.

somehow you've managed to completely remove one of the numbers from the block, so now that input is the input slot with the CHANGE Y command

other people are loading the project fine so you probably just need to refresh and fix whatever numbers are supposed to go there?

seems like you had some extremely rare issue that broke the block, if you can find a way to do it again it would be a good bug report

I think it automatically says inside a custom block when a variable is causing the error. But that shouldn't happen.

I dont need advice about the project. I was reporting a bug.

seems like you had some extremely rare issue that broke the block, if you can find a way to do it again it would be a good bug report

maybe, but there are zero custom blocks in the project, and, as you can see, there aren't any commands being put into any variables

weird, it doesn't give that error anymore

when it tries to get the 3rd input, expecting a number for the end of the loop counter, it gets a command

wait, how did i put a command in the 3rd input??

something is wrong here

yeah it works fine now. I have no clue how i managed to do this.

and no, i did not use the join block to replace the input (if you even can)