About the old topic:

I'm sure some of you might remember this topic:

Hello! I created a text engine with a cool(-ish?) looking font! It's kinda slow if you're going to put in a lot of text into a block but, it's a start. Download it here: Snap! Build Your Own Blocks It's got symbols, numbers, and letters! It even supports the copyright symbol! Also, optimize the blocks, it's slow when putting large amounts of text into a block.

This topic is now outdated. The

block has been completely redone from scratch.

The block is now simple, just, for some odd reason Snap! isn't fast enough to draw text using the

block. I honestly have no idea why that is.

Oh! I forgot to mention that there are now functions, instead of unreadable data for the parse and draw block. Say like, the letter data block. It's been changed to report this: 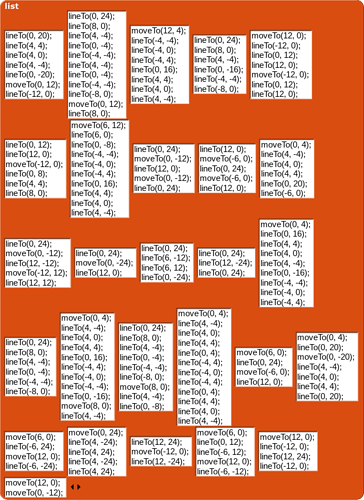 Yes, the old one is smaller, but you couldn't even understand the old one compared to the current one!

I would say that's more readable than the old letter data.

You can get the (currently being developed) blocks here: Snap! Build Your Own Blocks

Commands can be called just like how functions are in JavaScript.

Here's how to call a command in text:
commandName(arguments seperated by commas)

Someone please explain this part above better.

There are a total of 11 commands. (and there might be more coming soon!)

I think the unreadable text is better, though you can make a font editor. I think that is the best option