Stopping a "When I am clicked" script once it's called

I have two "When I am clicked" scripts for the same sprite, but they give different outcomes.

I've tried using a "forever" "stop script" block at the end of the first script, but it still gets called the second time.

How can I get the first script to run the first time, but never run again after that, even when the sprite is clicked for a second time?

I added this to my program at the top, but it would still run the script involved. I even added a "stop script" block after the "...". It works if I run the second script by starting it manually, but the two scripts would kinda merge (ex. text merging when speaking)

you could use block variables, just create a custom block like, 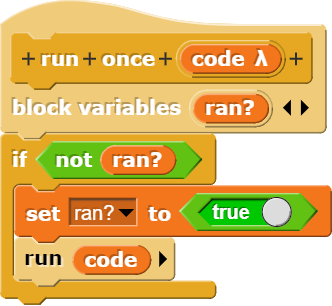 right-click the define block and then click block variables.

I added this to my program at the top

If I'm understanding "at the top" correctly, I didn't make myself clear. That "..." was meant to represent the entire rest of your script! There shouldn't be anything underneath the IF.