If you click and hold the stop button, it'll stop eventually (should be within seconds).

if you wish to explicitly yield inside a warped section - or inside a straight script which otherwise also wouldn't yield - you can use wait 0 secs to force a single yield.

Oh, is that what he meant? I thought he meant, you know, stop!

good question! I have no idea, but I thought this was a possible interpretation of his question to "stop warp" and then continue the script. Discussions with programmers and mathematicians often suffer from too much conciseness

that did nothing, but I was asking if it's possible to stop a warp inside the warp. is that possible through js?

you can do anything by hacking JS, even if it's a bad idea

I'm still confused about what you mean by "stop a warp." Do you mean stop the script, or keep running the script but unwarped?

STOP THIS SCRIPT will do the former. As for the latter: 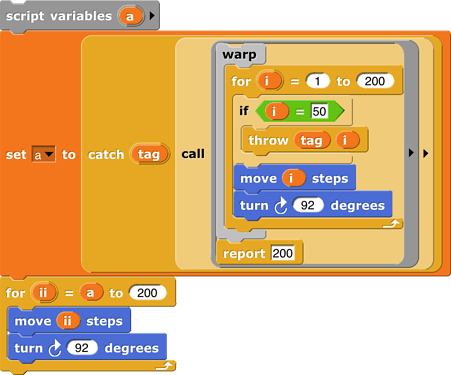 untitled script pic1118×928 119 KB
It took me a while to get this to work, and This should work, but doesn't. And the way it continues the FOR loop after escaping the WARP is specific to this example; you'd have to do something equivalent for whatever you're trying to do.

By the way, @jens, I wasn't sure escaping the warp like this would work. Congratulations on the non-fragility of call/cc!

Oops I take it back, it doesn't work; the code below the catch is still warped. This is a bug in call/cc. :~(

keep running the script but unwarped?

yes, that' what I meant.

what if I have a script that I want to run forever but it's warped under a certain condition?

what if I have a script that I want to run forever but it's warped under a certain condition?

You duplicate it underneath the warp, as in my example.

Didn't You want to force the screen update/refresh during heavy computation?

idk, this was just something I thought of, and I might use this in a project