Which sprite moves? Decide what you think before you try it. Then try it. Do you find the result to be what you expected, or is it surprising?

This is an experiment in aid of a conversation I'm having with Jens about what users' mental model of Snap! procedures is. I'd like to hear from people other than the half-dozen who post a lot! (Them too, but others also.) Thanks.

Since the variable is set to a block, sprite 2 should run it as if you stuck the block in the run block directly, in this case, sprite 2 should move. If you want sprite 2 to make sprite 1 to move, then you use the tell block.

edit: of course variables should keep their context (in a grey ring). It's just really fun when you figure out how it works.

Same as above. I view the variable as the blocks on their own, not with any context.

Running the variable will work:) It is very similar to my Snap! Editor, in Snap! project, that adds them to a list then runs them.

Which sprite moves? Decide what you think before you try it. Then try it. Do you find the result to be what you expected, or is it surprising?

This is an experiment in aid of a conversation I'm having with Jens about what users' mental model of Snap! procedures is. I'd like to hear from people other than the half-dozen who post a lot! (Them too, but others also.) Thanks.

Same as you and the other people in this post:

okay im guessing that the block acts on whichever sprite calls it, so sprite 2 would move. its almost like asking:

whos adding 2 and 3? well, the block is, if i keep a reference to

i guess the difference is that the move block doesnt do anything on its own (like mapping some intput to some output) it changes something outside of itself, and i guess the question is what does it change or how does it know what to change? i believe this depends on the blocks definition. is the object defined explicitly or passed implicitly?

well, the answer lies within source code written in javascript

'this' refers to the caller, which can be any sprite, so im locking in my answer on sprite 2

which i dont feel like digging through right now so ill leave it at that. neat trick, seems counterintuitive. i think theres too many ways to do the same thing currenly, the ask/tell blocks, [att] of [obj], broadcasts, simply putting global variables/lists to handle communication. not sure where whats appropriate when

There's something to that. Partly the goal is to "keep simple things simple," so we maintain the Scratch idea of BROADCAST as a way to let the receiver decide whether to handle a particular message. On the other hand, we want to teach OOP with sprites as objects, so ASK and TELL serve to send a message to a particular sprite. On the third hand, ASK and TELL aren't really orthodox OOP because instead of just sending a keyword, i.e., a text string, maybe along with some input data, and let the object decide how to handle that message, ASK and TELL let you put the method code in the caller; the orthodox OOP way is to use OF, which lets you call only the sprite-local blocks that are published by the callee.

Global variables for communication are a last resort, or maybe a first resort for people coming from Scratch who don't know any better way to do it, especially because Scratch doesn't have custom reporters.

About what happens where in the source code, the answer (official from Jens) is that when a ring is executed (as it is in the SET block in this example), it turns some code into a procedure, which remembers the context in which it's created, including things like local variables but also including the current sprite, the one that's evaluating the ring. So that's when the MOVE block becomes, in effect, a MOVE SPRITE1 block.

The OF block has the magic power to turn the procedure into a new procedure with the other sprite in its context.

@everybody: The reason I posted this is that in a conversation with Jens it turned out that I totally didn't understand this point. Jens convinced me that it's the right thing, but I told him that I'm pretty sure no users understand it that way. Users think the procedure is just its code, and when that fails, they move to a model in which a sprite is wired into the motion blocks in its palette. Seeing the ring as what does the binding of a block to a sprite nobody gets, except now the people following the thread.

So, I'm not arguing to change the model, which is really pretty elegant, but I think we should do something to make it more discoverable for users. I'm not yet sure what the something is, but my first thought is that if you look at the value of FOO, it should be

because that can be applied to any block without relying on English grammar that happens to work for MOVE.

I should add that it's my fault that the value reported by a gray ring, i.e., a procedure, is shown with a gray ring around it. Really it should be some different visualization, a purple ring or something, to clarify that it's a procedure value rather than a request to make a procedure. I thought one new notation (rings) was going to be hard enough for Scratchers, and we could live with the ambiguity.

In Scheme (stklos is the dialect I have installed -- it's the least polluted by r6rs and r7rs), the result of running the lambda expression (which is what we represent with a gray ring) isn't a lambda expression, but rather a closure, which is the procedure text (the stuff in the lambda expression) combined with the environment (all the visible bindings of names to variable values). Most Scheme implementations, including stklos, don't try to display what's inside a closure, because environments are typically very heavily recursive data structures. (See SICP 3.1 and 3.2.)

P.S. I forgot one of the ways to do message passing: the BROADCAST block now optionally takes a particular sprite to be the receiver of the message. So the message is a keyword, rather than a block. This is the official correct (i.e., Smalltalk) way to do message passing. I think this capability is good to have, although using the name BROADCAST for it bothers me somewhat. (Media people these days talk about "narrowcasting" when they use what is generally a broadcast medium to send something only to selected viewers. That's a cute neologism but I wouldn't want us to use it!)

Can I ask under what circumstances is binding the code blocks, to the sprite that sets the variable value, useful?

Apart from being an easier way of telling a sprite to do something.

Well, first of all, most of the time sprites don't move each other at all. If they do tell another sprite to do something, it's generally at a higher level of abstraction. So yeah, this specific example is a little arbitrary; I chose it to be simple.

But, now that I'm thinking about it harder, I'm not sure I understand this still. If you Make a Block SQUARE with REPEAT 4 [MOVE TURN] in it, and you make the block with Sprite(2) current, and then you switch to Sprite(3) and click the SQUARE block, it's Sprite(3) that turns, just the way everyone would expect. So I need another conversation with Jens... :~( (Not frowning about talking with Jens, which is always great, but about needing to talk with Jens because I still don't get it.)

JFI, this isn't a theoretical issue for me, It caused me a bit of head scratching in my Mayflower project unti l I worked out that I had to use one of these two methods 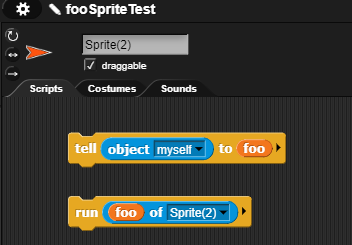 I know factually that procedure values capture the context (that the ring is 'what does the binding', so to speak), so I know Sprite1 would move.

I think that the issue is to do with the visual representation of procedure values. They display the implementation of the procedure, but there is no indication of context, so going by a 'WYSIWYG' intuition it would seem that they don't carry one.

As a side note, my pet definition of OOP (which is similar to Alan Kay's) requires dynamic dispatch. ASK and TELL strike me as not being object-oriented at all, even though you can use them in object-oriented ways; at least, it definitely doesn't encourage it. A novice would be much more likely to use them to command sprites remotely from other sprites than to send dynamically dispatched messages.

(Broadcasts are a better mechanism for dynamic dispatch in Snap!, but they come with their own downsides.)

See if you like the new BROADCAST option of specifying a particular object to get the message.