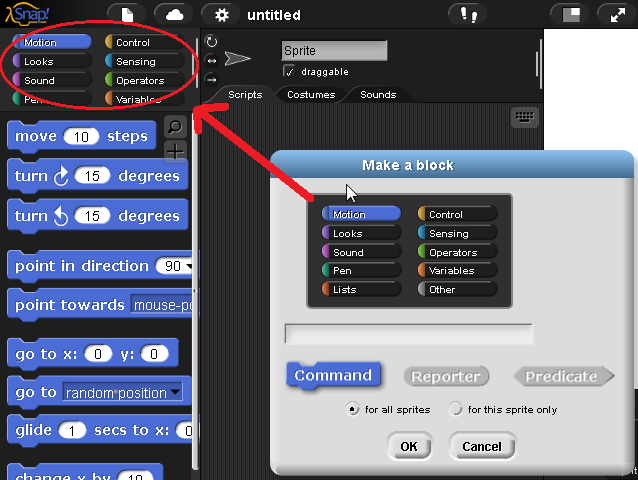 I've been advocating for that since forever. Used to be, Jens was against it because he hates when a category has to be scrolled in the palette so he's jealous of space in that column. But now that we have user categories he might be more amenable to it.

User catories are full width so that user category names can be detailed, as they already are in the SciSnap library. I don't think you're going to get half-width ones.

I want the Other category to include all custom blocks automatically, in their assigned colors, making it a multicolor palette. That would make it easy to remember what custom blocks you have. That would combine well with splitting Variables into three categories.

on a related note i think there should be a + button in the categories section to create a new one instead of hiding it in the menu, then the last categories can be arranged:

this encourages giving proper names to categories instead of just putting them in other, and keeps the menu balanced by default

The "other" category can be removed, not necessery since we have custom category

Except that some libraries use the other category

that doesn't matter, it won't break libraries for blocks to change category, and i'm almost certain that importing blocks creates the category if it doesn't exist anyways

The "other" category can be removed

But but I want to use it to display all the custom blocks at once!

And I think you wanting half-width custom category buttons is doomed because of SciSnap.

isn't the reason custom blocks aren't separated is that they should be treated as primitives?

And I think you wanting half-width custom category buttons is doomed because of SciSnap.

I'm pretty sure you can adapt the names of the SciSnap category... or you can display a bubble with the long version of the name like this:

you can adapt the names of the SciSnap category

isn't the reason custom blocks aren't separated is that they should be treated as primitives?

Yes. I want to have my cake and eat it too. In the colorful palette categories, I want custom blocks to look exactly like primitives. (To make that really true we need a way for users to control positioning in the palette.) But, at the same time, I want to be able to see what libraries I have loaded, and to find blocks whose name I don't know.

in that case the current other category isn't a good solution to that, there should be just a button that mixes all the various categories of custom blocks into one menu, with a "custom" button

the current other category is just a dumping ground for custom blocks by people who don't group them by purpose, and it gets MUCH worse when multiple libraries start dumping unrelated blocks in other

I suppose, although that's why I'm proposing to repurpose Other, to be your Custom button. Since there are no (unhidden) Other primitives, the custom blocks are a superset of the Other blocks, so you don't lose information by combining them. I'd be okay with changing the name of the category to Custom, I suppose, although maybe stick with Other in the make-a-block dialog.

i agree with most of that, i just don't want the "other/custom" category as a place to put blocks, it should just be a "custom" for viewing. custom blocks should either be put in the existing categories or a new one should be made. "other" isn't a helpful name and because it's easier than making a category it encourages a bad habit.

i especially don't think there should be any custom blocks that are ONLY visible in the custom view menu, it would be very inconvenient to have to look through a bunch of unrelated blocks to find one that happens to not have had a group put on it

I think just using the default category when you make a block is quite a minor sin. I have enough trouble convincing kids to make blocks at all! It feels okay to me if a kid only makes two custom blocks and leaves them in Other faute de mieux.

Or maybe it could scroll the text on hover