https://snap.berkeley.edu/snap/snap.html#present:Username=helicoptur&ProjectName=Sorting
Enter the data size, then press space to start.
It takes longer the larger your data is.
Edit: Added "double bubble", which is a failed attempt to add comb sort bubble with two pointers. Exciting!

Nice, this is pretty cool!
I still don't understand how it works, though.

Nice visualization. And I love how you use the SORT block to randomize the data! (Although you're kind of lucky it worked; it's not obvious that a sort algorithm will terminate if its comparator isn't a function.) I wonder if it would be easier to see the algorithm if, when you swap two values, their positions could GLIDE to each other's starting position. (I know, the vertical bars aren't sprites, but you could have just two sprites, a little thicker than the drawn bars, to enact each swap.)

Why does everyone except me like bubble sort so much?

The next step would be to have a choice of sorting algorithms, so you could show a mergesort for example.

It takes longer the larger your data is.

The moving green bar is the current position of the algorithm. It goes through the list, and if it finds a misplaced item, it puts that item where it's supposed to be. This is repeated until the list is sorted.

I said that mostly because of the green animation at the end, which can be boringly long, and I couldn't find any way to speed it up. (I think I have an idea though.)

Why does everyone except me like bubble sort so much?

I originally made it bubble sort, but, again, it was boringly slow and I couldn't find a way to speed it up. So I changed it to... this? If anyone knows the name of this algorithm, please tell me.

Oh, wait, this isn't bubble sort? It repositions the out-of-place value by already knowing where that value belongs? That's cheating! What makes sorting hard is that the algorithm can't know where a value "belongs" until all the other values are in place also.

Ah, noted...
Edit: I'm changing it to bubble sort, because I can't figure out how to make the current version cheating-free. There will be more types of algorithms in the future.

You can do this to make things clearer for the user. 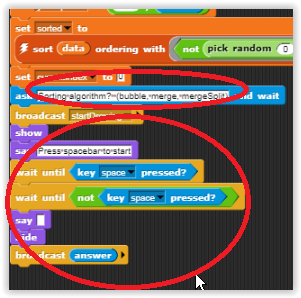 here's a remix of your idea

You can do this to make things clearer for the user

I would, but I'm planning to implement a lot more algorithms, and eventually the ask box would run out of space.
I'll do something similar though.

and eventually the ask box would run out of space.