those are super cool and very beautiful, artsy projects!

Thanks! I added some older Animations, check them out as well!

They are so beautiful. Wow!

The problem with nested sprites is that they are turning not the usual way (i.e. based on their own TURN block), but based on a combination of their own plus the turns by the sprites they are attached to, which I assume was not what you had in mind. So, I had to use a trick to prevent this addition of turns in the remixed project below.

EDIT: But now another problem appears with the nested sprites. They keep drifting apart. Could this be prevented somehow, @jens ?

I am totally fine with my version, but thanks for that remix! That's also nice!

The project was an experiment if it is possible to (more or less) easily build a chaos pendulum in SNAP!.

And, am I the only person who sees the project that buggy? 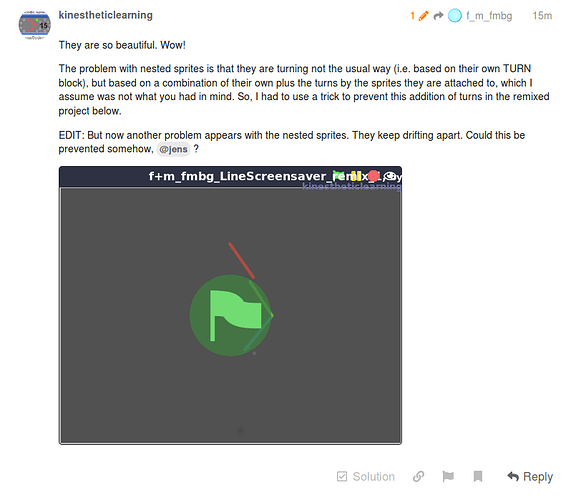 Still, if you (or anybody else) wanted the nested sprites to be turning only within certain limits, this addition of turns makes it hard to achieve.

Interesting how the nesting breaks in this project. Turns out it's caused by the graphic effect. If you remove all the SET GHOST effect blocks it works for me. Interestingly also if you fwiw wrap a WARP block around all SET GHOST blocks. This must be a bug...

The user name covers the flag and pause button in the embedded project.