Sorry to post this here, I did not know where documentation errors belong.

On page 6 of the manual, there seems to be a missing REPEAT (4) block, based on the text description: "In the sample script, the repeat block has two inputs: the number 4 and the script "

No, the point of that paragraph is that

is an input to the REPEAT block.

Since the sample script is more than one page away from a reader's eye when it is referred to, it would be nice to have it labeled somehow in order to help keep it in the reader's short-term memory 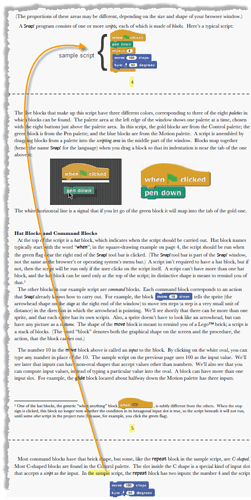 Also, maybe you want to avoid calling both the sample script and one of its inputs (the two blue blocks) by the same general name (i.e. script) and instead maybe say that the script has two inputs: the number is an input (in a more narrow sense of the word, i.e. filling a slot) and two blocks that are also inputs, but in a more broad sense of the word, since it does not fill a slot, but a C-shaped empty space. I'm, of course, just thinking aloud.

two blocks that are also inputs, but in a more broad sense of the word, since it does not fill a slot

Well, clearly that text isn't succeeding, so I'll rewrite it. The point is, the script slot in a C-shaped (or E-shaped) block is an input slot. It looks different, but semantically it's the same as a

Rewritten for 6.0 manual with the entire script repeated before listing inputs.