Can anybody explain this?

In Snap! - if you want to work with big numbers - load in the Big Integers library 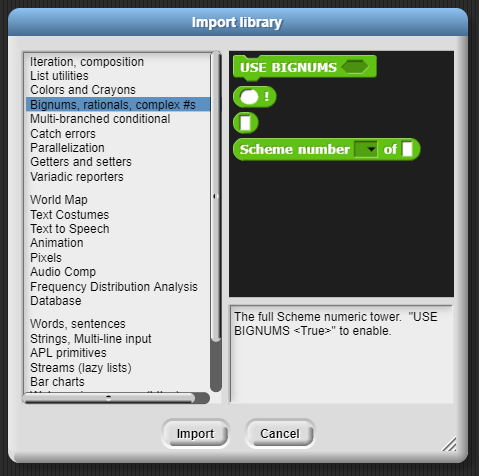 you can use this instead of =

that's because identical checks if the two inputs are exactly the same, for example, 3 is not identical to 3.0. You should not use identical for math.

anyway, you don't use this for math:

It's a true/false reporter...

If you want it for math you are using the

If you want it for math you are using the

Are you (@ego-lay_atman-bay) being sarcastic? If so, don't. Be nice. And remember that English is not @loucheman's native language.

But, @loucheman, what does using or not using SET have to do with whether or not something is mathematical? Also, "math" doesn't just mean arithmetic. When you say

It's a true/false reporter...

I think you mean that when a block reports a Boolean value that makes it non-math. But true/false values are called "Boolean" after George Boole, the mathematician who gave logic its modern formal definition. The Boolean operators and the values False and True make an algebra in the same sense that a group or a field is an algebra.

Are you (@ego-lay_atman-bay) being sarcastic?