Could Scripts be introduced? These scripts work like sprites, but it could not include its own costumes and sounds, and it can be by itself or be nested with a other script, or a sprite.

I don't understand. If you want to make the script usable as a value, we already have that with gray rings. If you want a script that isn't associated with any particular sprite, put it in the stage's scripting area. If something else, please give an example.

I understand your confusion.

If I wanted to make a sprite only to run scripts and not hold costumes and sounds, and to be itself, then a script could help.

If you are still confused, then let me know.

Can't you just make a sprite and HIDE it? Then it will behave like what you want even though it has the capability to behave in other ways too.

And also, you can use Snap! first class scripts feature!!

And a "simple" variable can store all your scripts. Something like this: 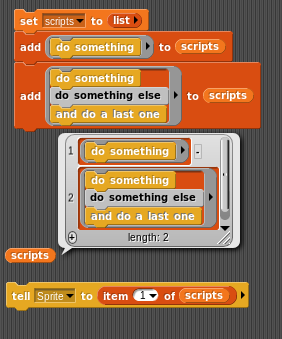 I guess that could work, which I already know.

If you want nested scripts, you can also use the way @jguille2 posted and have a script in there use another list of scripts, or maybe even the same one.