(bug in the dev version)
When the "Single palette" option is enabled and you hide all/(unconfirmed) most primitives, this mess happens: 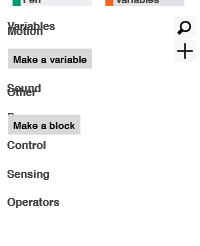 Please do not send bug reports about this development version! We know there are plenty of bugs. That's what "development" means. This is not even an alpha-test version; when there is an official pre-release you'll be the first to know. :~) We are hoping this will be ready for release in time for Snap!Con, which is three weeks away.

Seriously? I didn't even know that. It didn't even mention that anywhere, not even in the About window or something!
And isn't catching bugs earlier better? If we're not even supposed to report bugs this early, maybe, you know, make the build private or something or make that more obivious? (yes i know I don't think you are a dev but still)
Just why.

Someone was asking for a feature that's in this version, so I mentioned it.

Our dev versions are always sort of "open secret"; we don't publicize them, but anyone can connect to the URL if they want to play with it early. But, just for example, the single palette is on by default in dev, so we can easily test it, but probably won't be when 7.0 is released.