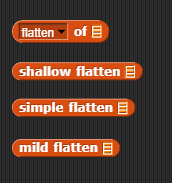 Or have you got your own alternative suggestion

I vote for the 'mild' adjective because the rest of them are all 2-syllables long.

I vote for "shallow" because that's the official term everyone understands. (Although in some systems "flatten" by itself means a shallow flatten and you say "deep flatten" if that's what you want.) We don't have a shallow-flatten primitive because you can say

to get that result.

Are you proposing a new primitive, or just asking for advice about your own projects?

I was asking about what people thought about using a name other than shallow.

Lots of other reporters are shallow ones but none of them use the name.

Shallow doesn't grab me so I was looking to come up with something more appealing.
Simple is a compromise - mild is just nice and short but less computing like

FYI I'm calling this in my custom reporter

APPEND is a little different because it requires that its inputs be lists.

That's not a real issue - I'm only trying to flatten lists.

It's more whether if someone saw append input list with just the one variable attached to it - would they guess that it does a shallow flatten?