Custom block, with argument "my_list"
script variable "a"
set a to my_list <== What is this doing, internally?
change a
report a

Are these calls by name? If so, how can I do (or simulate) a call by value?

If you want a (top level) copy of a list, you can use

If you need a deep copy (because the called procedure is going to mutate a list that's inside the argument list) you need a procedure: 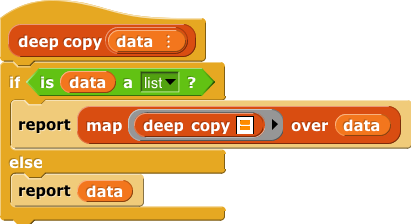