So, first, do you want to emulate an old BYOB 3.0 Project in Snap!?
Ok, I have an first example of this for you.

This is the first example, later I have to scripting more and more projects.

Ok, this the example to rock with you, friend.

Do you wanna to play with me?

Example Nº4: Ants (Not published yet.

Did you just copy the "Tools" project from BYOB 3 to Snap!?

Not only the Tools name, this is project I have to made it to rewrite the code of the original BYOB project in this. So this project is from an empty code to be so advanced.

pretty sure you can just import byob files into snap, and they'll convert to snap format.

Do you mean that you copied it by hand, block by block into Snap!?

Exactly, not with hacks or compilers.

Ugh, it's block by block, not a compilation.

I don't use the file of Tools, I have to check and look to the .ypr file to see the code and script it.

oh, so you made this project for people to use byob features that snap doesn't without having to import a byob project in snap? 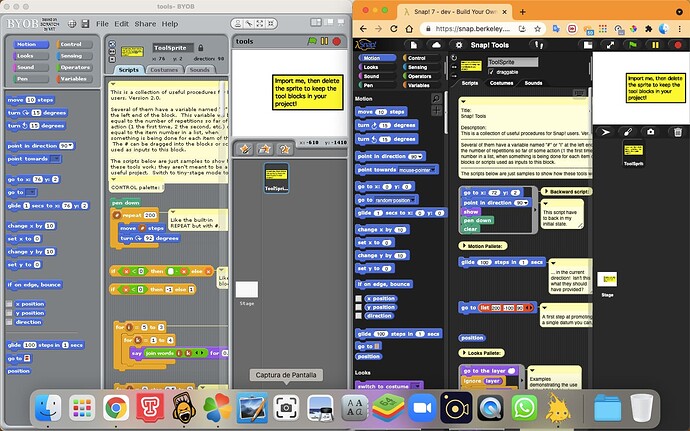 I'll go use the Tools.ypr file and fix what isn't in Snap! and give you the link when I'm done.

Some of the BYOB tools blocks are now primitive in Snap!, such as MAP, KEEP, and friends.

Many others are in the Iteration, Composition library. I'd start there if trying to reproduce the Tools sprite.

Exactly, but, everyone, do you want to do the Ornaments here? It's time to rock!!!

Ornaments is here for now!!!

That's a cool project. It sounds just as bad as real bagpipes. :~) But a little off-topic; you didn't find those blocks in Tools!

Exactly, every example is a, DIFFERENT PROJECT TO ROCK!!!