I decided to make a sandbox simulation because I thought it'd be fun and in sayochi's version sand doesn't fall down slopes.

This a project that simulates sand and water (and oil I guess, it's just water but colored differently and goes up when in water). However, the program isn't as fast as I'd like it to be, and there are some quirks that happen when there is a stream of particles. I am not sure how to help with both of these problems, so I would appreciate any help.

Not to sound mean, but this looks a lot like griffpatch's simulation. Did you use all your own code?

i just found out they're called "falling-sand games" 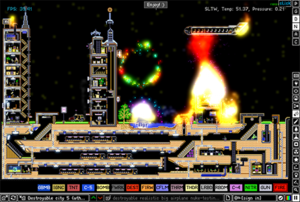 A falling sand game is a genre of video game and subgenre of sandbox games using a two dimensional particle game engine. The user can interact with (e.g. place and remove) particles on a canvas which can interact with other particles in various ways, which can lead to complex emergent behaviour. As Sandbox games, they generally have an emphasis on free-form gameplay, relaxed rules, and minimal goals. The first known popular example in the "falling sand" genre was a web-based Java applet on the ...