link
Read the project notes too!

S!ML is kind of like HTML in Snap! it is WIP but I am having issues. It was working but now it is not, the -color- aittribute.

instead it comes out blue. Please help.

To use: Read notes, also attributes/tags have NO closing. One word per -p- tag. Example.

No capitals because shift key is NOT supported!

- this is a comment
-var-(var name) - this creates a var
-varv(ID)-(value) - sets var value
Variable ID's: ID's identify the variable easier. Every var you create with the -var- tag has an ID. The first -var- tag used in the script makes the ID of the var "1". the second variable you create is "2" and so on. Your variable is named what you named it, but the variable creation list has the ID.

It was working but now it is not, the -color- aittribute.

instead it comes out blue. Please help.

The problem is that "red " does not equal "red". -color-red-p-moew works, though.

No capitals because shift key is NOT supported!

I fixed that in my remix.

-p-moew mull does seem to work.

-p-moew mull does seem to work.

Yes I just discovered that earlier today, I am aware and changed the project notes. May you send me your remix?

The problem is that "red " does not equal "red". -color-red-p-moew works, though.

It is not just red that does not work. Please explain this. Oh, the reason -color- did not work is because of the space. :facepalm:

May you send me your remix?

I just made a small fix to it.

I know. I might not use it though because I did not write it making it harder for me to edit it in the future. I might redo the code itself with reference form your code. Thanks.

Well originally it was 9. But I chose to do 5. For now it works especially because there is not much to do with them yet… just fundamentals.

I attempted to replace the way that keywords and their use are stored in the compiler section of the code. Rather than 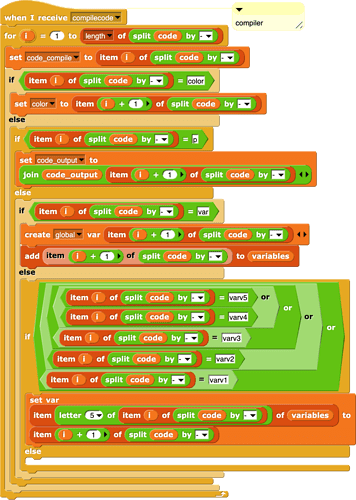 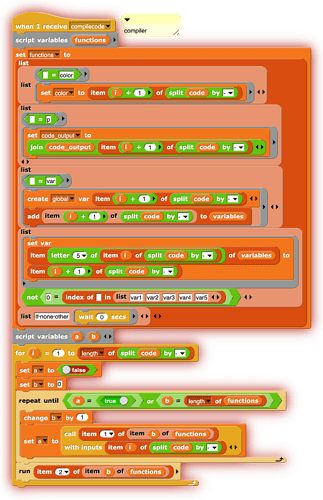