Does this bug happen to anybody else?
Queue Wood and Metal and Water;
when it plays, seeking forward or backward 5 seconds or skipping to the end
instead restarts from the beginning.

Do you want royalty-free music playing in the background of whatever you are doing?

Interesting. I'm a big believer in IP-free software (just learned yesterday that the reason I can't get active hyperlinks into a PDF on the Mac is that PDF is owned by Adobe and... you get the idea) and books and stuff, but when it comes to music, whether it's the Beatles or not is way more important than its copyright status. I guess I'm saying music isn't fungible.

The hangman game inside the project now has a Web Dev and OOP alternative.

Does this bug happen to anybody else?
Queue any song by Shane Ivers (SSS Query);
when it plays, seeking forward or backward 5 seconds or skipping to the end
instead restarts from the beginning.
This has been resolved; see below.

Speaking of bug and Shane Ivers, I practically put the songs in there twice; some of my big changes were being undone in the same session.

Queue Wood and Metal and Water;

This won't work anymore; the URL for the song appears to be broken, so I'm removing it from the Repository.

Slow Burn is in the Emotion: Happy Query. I just did a search for the definition of slow burn, but it is a gradual increase of anger... I don't think the song sounds angry enough to put into the Emotion: Angry Query.

Does this bug happen to anybody else?

I loaded Nightchaser into an audio element in js.do and Night Cave in another for a control, and the bug still applies. I went to the free music page and found that the bug does not apply; how? It uses a different song URL! Fortunately, it also works in js.do (and also without the bug), so I'm sure it will also work in the KM Music Repo.

Why does the music keep pausing and un-pausing by itself?

It shouldn't do it by itself unless it hasn't loaded all the way.

Ok, it stopped doing that

I started this a little while before Snap! had a community. My mind was blown thinking about how much Snap! has developed since then. 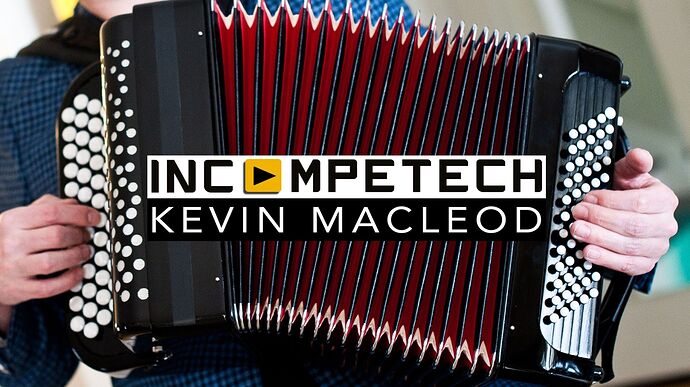 I just added my most recent ACT to the Repository!
It's called the Kevin MacLeod Music Repository because it started with just his pieces (Incompetech), but I also included pieces from another website of his (FreePD); then I included another royalty-free composer's website (Shane Ivers, Silverman Sound Studios) that I learned about from Incompetech. Now, there are three pieces of mine (one is an alternate mix of another).

For those of you that can't access YouTube, ACT is a series on my channel; it stands for A Cappella Tunes.

Uhm, SnapenilK I cannot load the project without the whole page ending up unresponsive, is this happening to just me? And then when it does load, it's like: 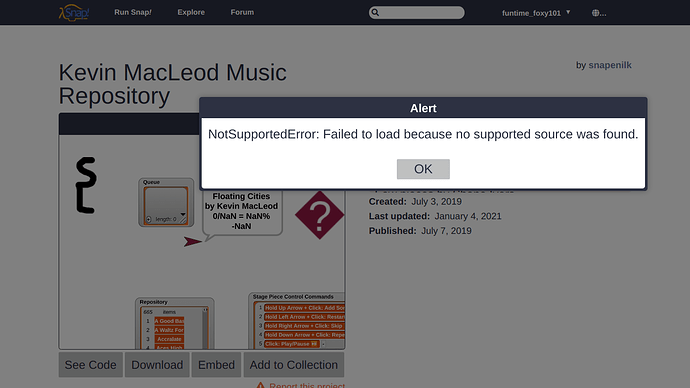 Yesterday, Incompetech's web certificate was invalid, so we were unable to play any audio from Incompetech.