The "current location" block is very bad, as well as the primitive block for getting geolocation, i am pretty sure snap also has the ability for you to put data into your servers using your api, so together that would be a deadly combo.

In my opinion current location is a very dangerous block in the web services https library,

The maps library also contains geolocation. If you don't want Snap! to be able to access that data... just turn it off in site settings? 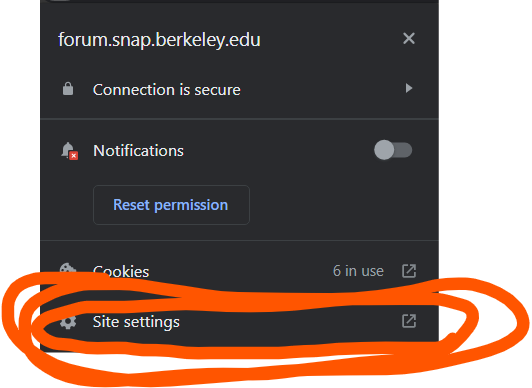 EDIT: This is if you're on Chrome/Chromium or any Chromium-based browsers (i.e., Edge, Opera, etc.)

It’s used to making maps and it would be really hard to steal someone place I’d think because you’d have to store it in a cloud variable and store all the coordinates correctly if it’s possible.

The browser will ask permission before running this the first time. Also I wondered about accuracy. I tried it and put me two houses away. But the danger is that one could use the POST url: block to send the location to a server run by the author of the project. But would it know anything else about the user other than location?

I'm sure is possible if someone's determined enough. I had a bad feeling too about those blocks, ive got my location turned off but I still feel like it could give someone the wrong idea. they could trick the user into giving them permission and like others said log that information to them through the cloud. even if thats all that they could get it's enough to at least scare people, just knowing what city someone's in is enough to cause problems.

The user would be able to see the code, so they might be able to tell if there's cloud variables in the project

well yeah but it could also go unnoticed, just saying it's possible and I could see something like that happening. you are right though, it's definitely a good idea to check code before you run it. but it's like asking people to read the term and conditions, but you know what they're thinking 'yea yea accept continue just do the thing'

ideally I think the user wouldn't have to worry about those things and there'd be no need for them to have to check a project to make sure it's safe. I think that's kind of the direction that snap pushes in so

ideally I think the user wouldn't have to worry about those things and there'd be no need for them to have to check a project to make sure it's safe. I think that's kind of the direction that snap pushes in

I've seen bh say many times that the point in having the user manually turn js extensions on, is to get the user to read the code to make sure it's safe, before turning js on. That applies to any kind of project, even if it doesn't include js.

my point is, snap is aiming for people to look at the code, even if it's safe.

I'm sure [it's] possible... [people] could trick the user into giving them permission and... log that information[.] ... it's enough to at least scare people, just knowing [someone's] city... [could] cause problems.

I don't think that's grounds for the blocks to be removed, though. I have a ton of geolocation projects that I use for fun... sure, there are possible malicious intents, but you have that with anything! Someone could use the DB library to store a bomb recipe (or worse) on your browser and incriminate you. With anything, you should always be looking at the code. Like ego-lay said.

you are right though, it's definitely a good idea to check code before you run it.

I get your point. But the geolocation blocks are super helpful! Really, to make sure you don’t get duped, the only things you can do are to check the code and possibly turn off geolocation in your browser.

im honestly not too worried about it myself i see where both sides are coming from i just dont understand why im getting told this over and over even when i agreed to it. like seriously, as much as i like to argue, i was trying to show some understanding, kind of level with people but i guess i just attract that type of energy

I'm not trying to argue- sorry if my posts came off that way.

Even if these blocks were removed, anybody can use external services to find the user's location.